AFL chief Gillon McLachlan has told finals fans not to stream onto the field to mark Lance Franklin’s 1000th goal.

It is expected extra security and police will be on hand to prevent the crowd from marking the milestone in the traditional manner of a pitch invasion.

In the past, the league has preferred fans not to run onto the playing surface to mark such landmarks though could do little to stop people power when the moment came.

Membership of the 1000-goal club seemed improbable for Franklin at the start of the season but, with just eight more goals needed, it is now firmly on the cards. It could happen in this Saturday’s Sydney derby elimination final in Launceston.

League officials and health authorities in Tasmania are desperate to avoid a scenario where up to 10,000 fans in a state without any active cases could come into contact with players and staff who would have flown in from locked-down Melbourne earlier that day.

“Fans running onto the field to celebrate 1000 goals, I’m not sure we thought we’d get to another 1000 goalkicker so let’s just celebrate that, that one of the greatest players to have played our game is being close to one of those almost untouchable milestones,” McLachlan said. 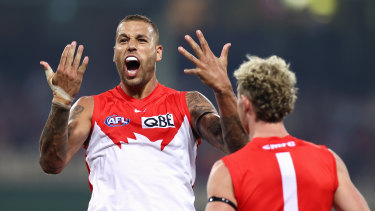 Lance Franklin is on track to be just the sixth man to reach the magical 1000-goal milestone.Credit:Getty

“It will not be appropriate in the current environment to run onto the field and I think all of our supporters know that.

“It will be a helluva thing to get to 1000 goals. I didn’t think he was going to get this close this season, I must say, and I reckon you can almost touch it now. It’s a pretty amazing thing if it happens. If they get into a second final you reckon he’s a pretty good chance.”

South Australia chief health officer Professor Nicola Spurrier prompted dismay and humour when she warned fans attending a game between Adelaide and Collingwood at Adelaide Oval in June to duck and not to touch the ball to safeguard against contracting coronavirus.

She clarified herself the next day, advising punters to sanitise their hands before eating.

Fans will be asked to wear masks for the two elimination finals in Launceston, which have been sold out.

“The Tasmanian government, the AFL and the stadium’s owners are all focused on ensuring the weekend’s finals are conducted in a COVID-safe manner that protects both the players and the crowd attending both matches,” a government spokesperson said.

“Public Health is providing advice on COVID safety, such as the need for the crowd to wear masks and to check in at the venue.”

Meanwhile, this year’s grand final will be held in Perth if the MCG, as expected, is unable to stage the decider due to the COVID-19 outbreak in Melbourne.

With the highest capacity of all AFL venues outside of Victoria, Optus Stadium is best placed to meet the AFL’s priority of having as many people at the grand final as possible.

It is doubtful if Melbourne will be out of lockdown by grand final day, let alone be in a position to hold events with large crowds.