This week on the Real Footy podcast, Jake Niall, Caroline Wilson and Greg Baum discuss three huge games from round 11.

More than 80,000 people were at the MCG on Sunday to enjoy “footy the way it was” – not just pre-pandemic, but also two power clubs of old going head-to-head on a great occasion. How much does the loss really mean for the Blues, aside from the injury to Jacob Weitering?

On the other hand, the victory leaves the Pies in a good position in the fight for a spot in the eight and their run home is pretty favourable. In another positive, Oliver Henry has been showing what a good player he is for Collingwood in the last few weeks. And Jordan De Goey is bringing consistency to his game, but have we seen enough to justify a mega contract for him going forward?

I’m in complete agreement with Fox Footy’s Kath Loughnan here that 7.50pm is too late to start an AFL game but what do you think?

At the halfway point of the season, both Geelong and the Western Bulldogs find themselves at a crucial moment. 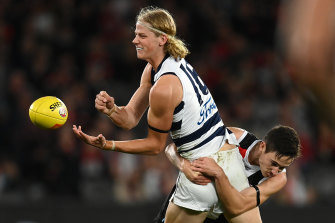 Sam De Koning is likely to get the job on Aaron Naughton this week.Credit:Getty Images

The Cats, at 7-4, can push towards the top-four with victory, but will be vulnerable with a loss.

Despite their improved performances, the Dogs, at 6-5, are even more vulnerable given teams like Richmond and Collingwood are in good form.

Late change for the Cats

Jake Kolodjashnij (health and safety protocols) is out for the Cats with Luke Dahlhaus in as a late replacement.

The Bulldogs are unchanged while Mitch Wallis (Bulldogs) and Quinton Narkle (Cats) are the medical subs.

Chris Scott is wary of the Bulldogs’ midfield depth ahead of their clash at Marvel Stadium on Friday night, conceding match-ups in Geelong’s back half needed some extra attention.

“Their midfield is so deep that they need to have the excess midfielders [play forward]. But you just need to think about those flips, and what the make-up of their forward half is going to be. 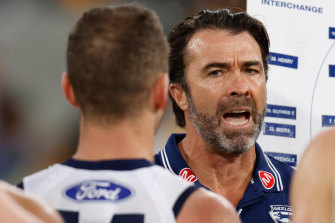 “It’s a bit of a balance between being conscious of what they’re aware of, but also asking some questions of their forwards. Tom Stewart played well last week, Mitch Duncan has been really effective back there, our backline group of six or seven or eight players have been pretty solid.

“I don’t think we will do anything to destabilise the way our backs play, put it that way.”

Opinion: Cascading blunders: AFL, Swans both in the wrong on Buddy case

The Lance Franklin case has been an unedifying spectacle for the game, the Swans and, not least, the AFL, even if it provided a measure of entertainment for the media and footy public.

The league’s lawyer Andrew Woods went well over the top in calling “Buddy’s” act “cowardly” – a rhetorical flourish that once upon a time would have been accepted as courtroom theatre, a QC not minding his Ps and Qs. The AFL had no choice but to apologise to Franklin, who deserved suspension for his strike, but not such a derogatory label.

Had Franklin’s strike been more forceful, employed with a fully clenched fist and he’d floored Cotchin in the manner of Barry Hall on Brent Staker 15 years ago, then “cowardly” would have been a fair call. But he didn’t and it wasn’t.

G’day everyone. I’m Roy Ward and welcome to our AFL live blog for tonight.

We have a compelling contest tonight as the Western Bulldogs and Geelong Cats resume their rivalry at Marvel Stadium.

Both sides still have high hopes for this season despite having their peaks and troughs in the opening 12 rounds and whoever wins will take plenty of confidence heading into the second half of the season.

Please feel free to leave a comment on the blog at anytime.

Enjoy the night to come!