We’re off in the AFLW!

And we’re underway between North Melbourne and Melbourne.

This is the first AFLW home and away clash played at the MCG.

All four previous encounters between these two sides have been at Casey Field.

This week on the Real Footy podcast, Michael Gleeson, Jake Niall and Caroline Wilson look ahead to finals and an intriguing first week of match-ups.

All the finals action kicks off on Thursday night when Brisbane host Richmond at the Gabba. Can the Tigers go all the way this year? How much will their recent home-and-away clash be a guide for this elimination final? Will the weight of expectation help Richmond and hurt Brisbane? Are the Lions good enough to win the flag?

Both North Melbourne and Melbourne finished in the top four of the last AFLW season (which was only four months ago, mind you) and last week, convincingly won their matches.

The winner of the this late afternoon game will head straight to the top of the ladder ahead of the weekend. 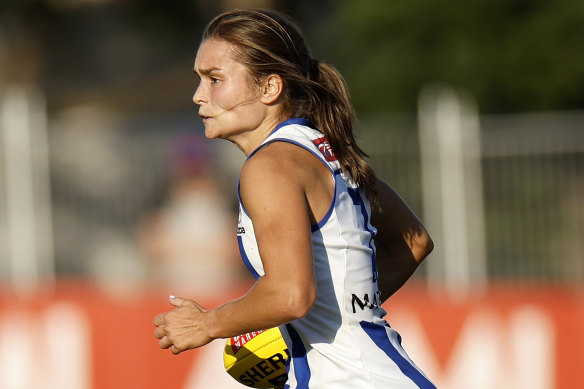 Ash Riddell picking up yet another possession last weekend.Credit:Getty Images

Hello and welcome to our live rolling coverage of what promises to be a thrilling Friday night of footy with the men’s qualifying final between reigning premiers Melbourne Demons and the in-red-hot-form Sydney Swans.

The winners will head straight to a preliminary final and the losers will face off against the Brisbane Lions, who beat Richmond in last night’s elimination final by 2-points at the Gabba.

But before we get stuck into that, we’ve got North Melbourne and Melbourne in the AFLW kicking off the first instalment of the double header at the MCG.

You can leave a comment on the blog at any time to let us know your thoughts on the games!