Buckley’s strange gift while they watch at the SCG

The crowd is small but building at the SCG. It’s remarkably straightforward getting into NSW as a Victorian, perhaps if more Collingwood fans had known they would’ve come up here.

In any event eyes are focused on Nathan Buckley. He was warmly greeted by Demon James Harmes and tells Fox Footy jokingly in a boundary line interview that he feels like he died this week such are the eulogies he’s received.

Buckley has also been presented a patch of SCG turf from the SCG Trust to mark the occasion.

President Mark Korda shared a moment with Buckley on the ground ahead of the Pies’ warm-up. The crowd is now watching the Big Freeze event on the big screen.

Daisy Pearce and Jeff Farmer are next …

The Demons skipper is dressed as Bluey. Looks potentially a warm costume should it stop a lot of water from getting in. But i’m not certain it will …. and yep she looks cold in the pool.

Next down is Jeff Farmer, an absolute star under Neale Daniher for Melbourne, and a man who knew how to perform on Queen’s Birthday.

Farmer is dressed as a Wizard (it’s his nickname), and it is a Demons themed Wizard he has gone for. But then he strips, except for a beard and some budgie smugglers and goes down the slide.

It’s 16 degrees in Melbourne. Not freezing, but cold. Certainly not weather for plunging into a pool of water and ice.

First slider is Hawthorn premiership player Shane Crawford. He is dressed as the Queen, but more so as a person sitting on her shoulders.

You kind of need to see it.

For a period during Nathan Buckley’s tenure as Collingwood coach, Magpies staff – including Buckley – would let off steam by playing a regular game of indoor soccer.

Buckley’s fierce desire to win was a theme of his playing career, and as he acknowledged at the press conference to announce his coaching resignation last week, he still relishes a scrap.

Read the full story here, on Buckley’s time as Pies coach according to those who worked with him. 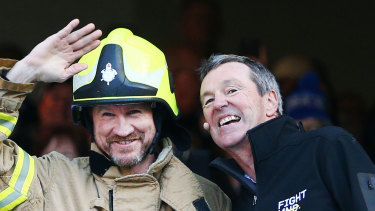 She is a big Pies fan and is performing before the slide happens.

The MCG is empty save for her, her band and the slide contestants, with the game happening at the SCG today at 3.20.

Welcome to Queen’s Birthday and The Big Freeze!

Hi everybody, we will take you through the game and the Big Freeze before it, where celebrities go down the slide at the MCG, to raise money for MND.