Carlton coach David Teague insists the Blues have made progress this season and the next phase of growth must be in seizing the key moments that can define a season.

Heading into their final clash of the season, against premiership fancy the Brisbane Lions on Saturday night, the Blues have the same number of wins – seven – as last season although this has been a shortened campaign. 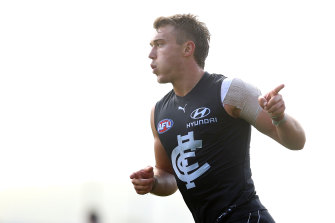 The Blues will be active through the trade period, having already confirmed Kade Simpson, who will line up for his 342nd and final match on Saturday, and Matthew Kreuzer won’t be back but Eddie Betts' future has yet to confirmed. However, Teague gave a hint, declaring Betts had been "outstanding" as a small forward, while his role as an Indigenous leader was also important.

The Blues have begun exit interviews and these will continue over the weekend. While Giant Zac Williams has been linked to the Blues, growth has to come from within, primarily in helping a banged-up Patrick Cripps who, at 25, is in his prime.

Paddy Dow, the former No.3 selection with only three matches to his credit this season and told to toughen up by club Greg Williams, and fellow midfielder Lochie O'Brien, the former No.10 pick having made his first senior appearance of the year last week, face potentially career-defining seasons.

"Both of them have grown this year. Maybe our supporters will look at games played but I think if we look at their fundamentals and the way they go about it, and their actual skill execution, we think they both have improved," Teague said.

Teague has good reason to be bullish. Sam Walsh has maintained his high standards, ruckmen Marc Pittonet and Tom De Koning have made major strides, Zac Fisher has found a spot up forward while Jacob Weitering is in All-Australian calculations now he is settled in defence.

Sam Petrevski-Seton has been steady at half-back, co-captain Sam Docherty has made a successful return from a knee reconstruction and Harry McKay, nursed through his initial years, is developing into the focal point the Blues had long hoped he would become.

Former Sun Jack Martin, set to return from calf soreness, can be a match winner but his form slipped as the season unfolded.

Struggling forward Mitch McGovern, on a lucrative contract, may have to play in defence next year, with Charlie Curnow to return from injury.

The Blues have been in eight matches decided by nine points or less, winning five. That their biggest loss of the season was by 31 points, in a meltdown against Hawthorn in round nine when they had led by 31 points, and have an average losing margin of only 16.4 points, has showed a fortitude the team has lacked for much of this decade.

Docherty (calf) and Fisher (shoulder) will miss Simpon's farewell clash but Teague said Marc Murphy, who had suggested he may miss, will line up.

Close encounters of the Blue kind: