The rugby league community was rocked last month as news broke of the 74-year-old Immortal’s death following a long battle with cancer. 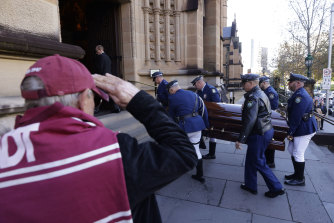 Russell, a Manly fan of six decades, salutes Bob Fulton’s coffin as the league legend is carried into St Mary’s Cathedral for his final farewell.Credit:Getty

“I never understood the fuss. It was just you, my Dad.

“It used to annoy me a little (well a lot) when people would come up to you on the street asking for a photo or an autograph.

“This would happen all over the world, not just at home. You took it in your stride.

“You were so giving and generous with your time and would talk to anyone from all walks of life.”

Fulton’s two sons Brett and Scott will join four of Fulton’s grandsons Zac, Kobe, Jake and Ethan as pallbearers for the service.

Manly Leagues Club at Brookvale will also be streaming the funeral service.