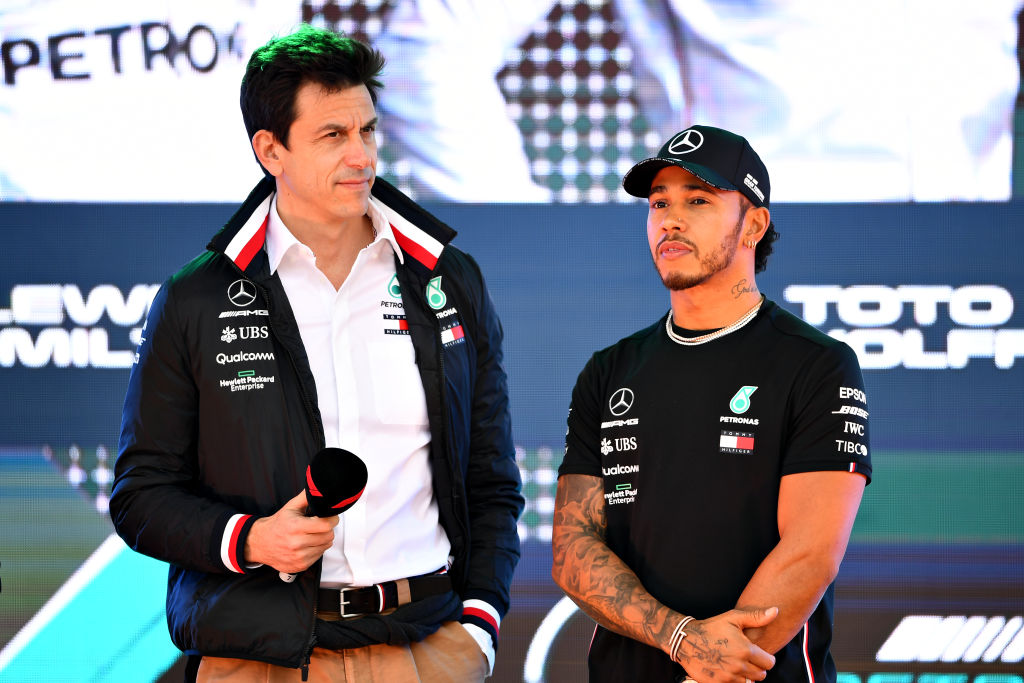 Sir Lewis Hamilton has refused to share what was said between himself and Mercedes team principal Toto Wolff after Friday’s qualifying session for the Emilia Romagna Grand Prix.

Mercedes endured a torrid session with a combination of a lack of pace and bad luck resulting in Hamilton and teammate George Russell qualifying 13th and 11th respectively for Saturday’s sprint race.

It is the first time since the 2012 Japanese Grand Prix that neither Mercedes car has made it to the final qualifying session.

As Hamilton was being knocked out, footage showed the seven-time world champion talking to Wolff in what appeared to be a tense and heated exchange.

‘How far are we off, man?’ he yelled after only just making it out of Q1. ‘This is crazy.’

When quizzed about what was said, however, Hamilton refused to divulge any information, saying: ‘That’s all-internal stuff, so I won’t share that,’ the British driver said in his post-qualifying interview.

‘But we’ll just keep working hard. It is what it is. Each weekend’s a rescue.

‘It wasn’t a great session. You come here with optimism and everyone’s working really hard at the factory and then things don’t come together, naturally it’s disappointing.

‘I think we under-performed as a team today. There are things we should have done that we didn’t do and anyways…we’ll work as hard as we can to move up in the sprint race.

‘It will be a difficult race but hopefully tomorrow will be better weather-wise and who knows, maybe we can work our way forwards.’

Both Hamilton and Russell have struggled to get to grips with the difficult W13 car which so far this season has looked woefully off the pace of main rivals Ferrari and Red Bull.

Nevertheless, results have been kind, with Russell and Mercedes second in the drivers’ and constructors’ standings, while Hamilton is fifth.

Red Bull’s Max Verstappen will start the sprint, in essence a shorter race ahead of Sunday’s main event, from pole, while championship leader Charles Leclerc of Ferrari is second.

The rain played havoc with the grid on Friday, with McLaren’s Lando Norris and Haas’ Kevin Magnussen surprisingly taking third and fourth spot, and the wet conditions look set to continue all weekend at the Imola circuit.