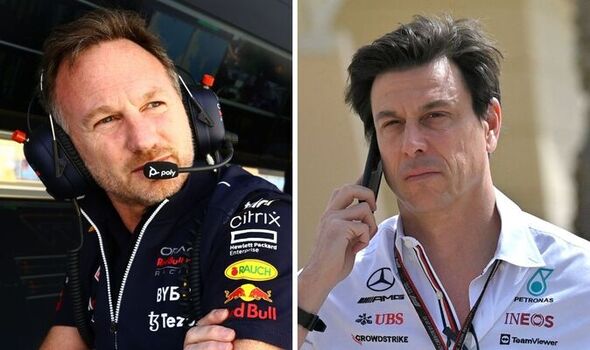 Mercedes team principal Toto Wolff seemingly has no sympathy for Red Bull after both Max Verstappen and Sergio Perez were forced to retire from the Bahrain Grand Prix. The Silver Arrows have found themselves on the backfoot for the start of the 2022 season.

Despite catching the attention of everyone in the F1 paddock with their eye-catching sidepod design on the W13, performance is yet to translate onto the track. In Bahrain, Lewis Hamilton and George Russell were far behind both Ferrari and Red Bull in terms of race pace and looked on course to finish fifth and sixth respectively.

But, with both Verstappen and Perez unable to finish the race, both Mercedes cars were bumped up as Hamilton clinched a surprise podium. And Wolff has seemingly taken aim at Red Bull’s problems, stating all F1 teams are aware that “reliability has always been a crucial factor” in the sport.

“The new F1 season started in dramatic fashion,” Wolff said in Mercedes’ press release. “There were some great, feel-good stories up and down the field at the first race and Ferrari did a strong job to claim a 1-2 finish.

JUST IN: Charles Leclerc explains why Ferrari are quicker than Mercedes

“For us, we made a step forward in terms of performance compared to the pre-season tests but were clearly third quickest behind Ferrari and Red Bull. We know the W13 has potential, and we need to continue learning, find out how to unlock it, and maximise our opportunities for points in the meantime.

“Lewis did a fantastic job to claim P3 and George drove a strong and mature race, making up places to finish P4. We scored the maximum points we could and more than we were expecting to.

“That’s partly down to others’ misfortune but reliability has always been a crucial factor in Formula One. Now we head to Jeddah and a very different track; fast, twisty and much of the lap taken at full throttle.

“We were there just a few months ago for the first Formula One race in Saudi Arabia, and with a new car and new tyres that we’re still learning how to get the most from, it will be a steep learning curve. That’s a challenge we’re looking forward to!”

With the Saudi Arabian Grand Prix taking place just a week after the season-opener in Bahrain, Mercedes face a tall order in making any big upgrades. But Red Bull will come into this weekend hoping to move on from the Bahrain Grand Prix and show what they’re RB18 is truly capable of.