Sergio Perez described missing out on third place in the Emilia-Romagna GP as “painful” – admitting that Racing Point “basically gave the podium to Ricciardo”.

Perez was producing one of the drives of the day at Imola, moving up the field from 11th on the grid after a long first stint, and was promoted to third into the closing stages when Max Verstappen’s Red Bull spun out of second place.

The incident triggered a Safety Car but, despite having pitted later than the midfield rivals behind him and so on fresher tyres, Racing Point called Perez in for a second service.

However, the three cars directly behind him – Daniel Ricciardo’s Renault, Charles Leclerc’s Ferrari, Alex Albon’s Red Bull – stayed out and so Perez dropped back to sixth for the restart. He overtook Perez at the restart, but was then overtaken by Daniil Kvyat and gained no further ground.

“Looking at it, it didn’t make sense at the time – the call was very late – but it’s always easy to take the right decision after the race,” said Perez to Sky Sports F1. “But overtaking today was extremely difficult.

“I haven’t spoken to the team yet so they must have some reasons on it, but a painful day. We had the podium in the pocket and it’s just hard to digest.

“They are as disappointed as I am right now. We are a team and we lose and also win together. In hindsight it was the wrong call today.” 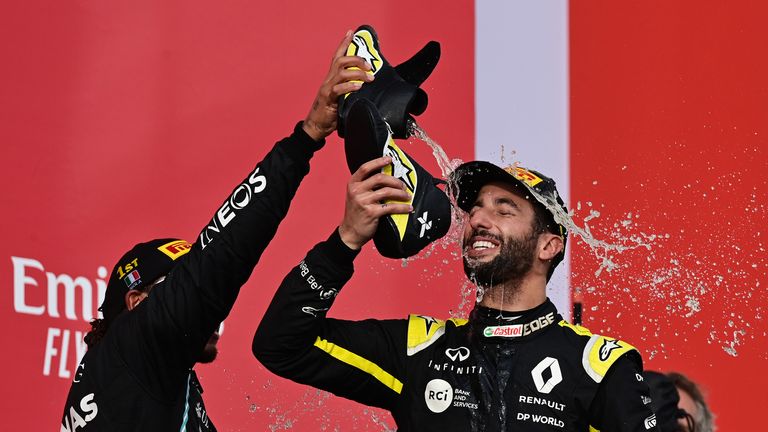 Reflecting on his drive up the order, Perez said: “It was a fantastic day. From all the negatives we can take a lot of positives.

“That first stint was tremendous. Great strategy, great calls from the team. We put ourselves in a position to get that podium.