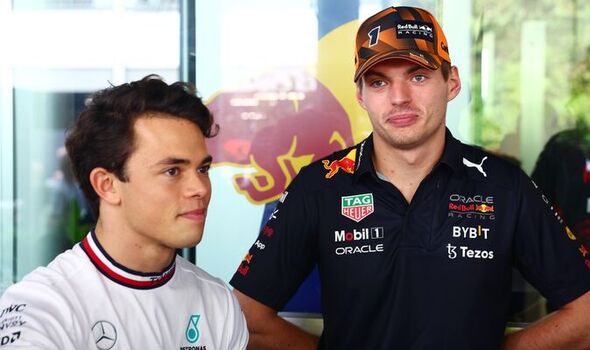 Nyck de Vries has confirmed it was a dinner with Max Verstappen after the Italian Grand Prix that led to him meeting with Red Bull and sealing a seat with AlphaTauri for next year. It was announced last week that De Vries’ long wait for an F1 seat was over after a deal was agreed with AlphaTauri.

He will take Pierre Gasly’s seat alongside Yuki Tsunoda at Red Bull’s sister team, leaving his role as Mercedes’ reserve driver. The Dutchman has long been tipped for a seat in F1 after winning the F2 title back in 2019.

He was finally given a chance for his F1 debut at this year’s Italian Grand Prix, taking Alex Albon’s seat at Williams, and impressed many as he finished ninth. Verstappen admitted earlier this month that he had dinner with De Vries after the race in Italy where the Red Bull driver first recommended his compatriot to give Helmut Marko a call.

And De Vries has confirmed Verstappen’s version of events, although stated he felt his past performances long before his display in Monza also played a part in him sealing a seat for next year. “We had dinner after Monza in Monaco and we talked about the possibilities and opportunities and that resulted in having a conversation with Dr. Marko and we met that same week in Austria,” De Vries said.

“I will admit that certainly Monza has speeded up a lot of the conversations. However, I’ve been kind of part of this F1 carousel for quite some time.

“After winning Formula E last year there was an opportunity at Williams and earlier this season there were several moments we were in conversations. I am a Mercedes reserve as well as a Williams reserve, so I have a good relationship there.

“Clearly the stars were aligned that weekend — the car was competitive there, there were grid penalties, retirements and without the safety car frankly we would not have finished the race due to right-front brake issues.

“So I’m very grateful for that moment also, to have my father close by and having him there to experience that moment together. The week after Monza I went to meet Dr. Marko in Austria — I was seen there so it became no secret anymore — and things went quite quickly from there onwards.”