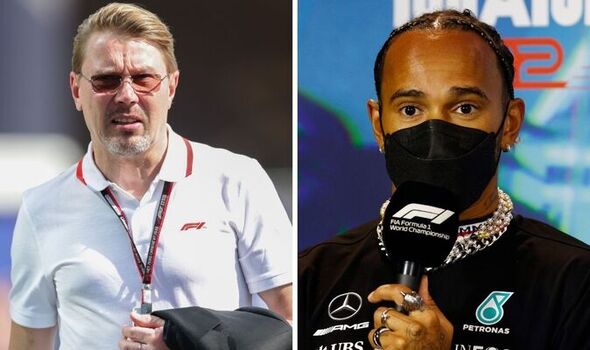 Mika Hakkinen knows why Lewis Hamilton was “not happy” with Mercedes at the weekend after a tense radio exchange between them in Miami. It’s been a season to forget for Mercedes so far with the team unable to compete with Red Bull and Ferrari.

The Miami Grand Prix proved no different despite a host of upgrades and a promising free practice session on Friday. There was a huge improvement from Imola for Hamilton as he was able to make it through to Q3.

But porpoising issues once again plagued the W13 with the Mercedes struggling to challenge with Valtteri Bottas’ Alfa Romeo. The seven-time world champion then found himself in a difficult position when a Safety Car was deployed, which played into the hands of George Russell.

Hamilton was then asked on team radio whether he wanted to come in as well, to which he frantically called on Mercedes to decide on the strategy. He ended up staying out on the old tyres and could do nothing about keeping Russell behind him.

JUST IN: Lewis Hamilton warned he could be banned from racing Monaco Grand Prix

It was still the best Mercedes could have hoped for with both Red Bull and Ferrari proving too quick for Russell and Hamilton. Hakkinen understands Hamilton’s frustrations during the race, but feels the British racing icon may have to look at the bigger picture from the weekend.

“Mercedes had a strange weekend, ultimately ending with quite a positive result,” Hakkinen wrote for Unibet. “They looked really quick on Friday – George was fastest in second practice and Lewis was 4th – but as the track conditions evolved into Saturday their speed fell away.

“George did a very good job to look after his tyres and run long in the race, holding out for a safety car period, and that worked really well for him. I know Lewis was not happy with the strategy his team gave him, but the safety car was outside their control and the team should really be quite satisfied to have both cars in the top six in spite of their problems.”

Mercedes team principal Toto Wolff has already promised both of his drivers that upgrades will be made to the car for the Spanish Grand Prix next week.

“We will carry out a few experiments on the floor for this,” he said. “In Barcelona, we will then have major modifications to the underbody, which will hopefully already be a solution.”

He added: “This is where we are. We are not as quick in qualifying and we go back to where we are, and that is behind the Red Bulls and Ferraris. “We will be looking at all the data we have, that we have generated, and try to find out [why].”