Mercedes have slammed the FIA for hitting George Russell with a “harsh” penalty at the Austrian Grand Prix. Russell was issued a five-second time penalty for contact with Sergio Perez at turn four on the opening lap.

The contact meant Russell had to stop for a new front wing and the Mercedes rookie returned to the track over 40 seconds behind the nearest car. Mercedes trackside engineering director Andrew Shovlin said he felt Russell had left “more than enough room” for Perez and had already been punished by losing so much ground.

Shovlin explained: “It’s been a very tough weekend in the garage but very satisfying to come away with third and fourth positions. We felt that George’s penalty for the incident with Sergio was harsh. He was up on the apex kerb and left more than enough room.

“We had to change the front wing after the contact, so it made for a very long stop. He had to pass through the field twice but raced superbly and maximised the opportunity.” 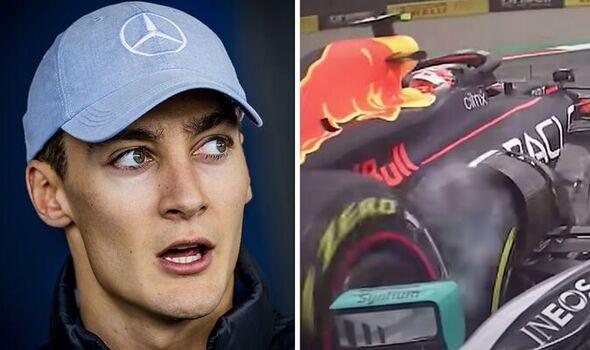 Russell appeared to have got past Carlos Sainz at the start but the Spaniard held on around the outside of turn one. The battle allowed Perez to get a slipstream on Russell out of turn three and the Mexican sent the car to the outside.

The Mercedes’ front-left tyre clipped the rear-right of Perez which sent the Red Bull spinning into the gravel. Moments later, Russell defended himself over team radio, claiming there was “nothing he could do” as Perez just “turned in” on him.

After the race, Russell protested his innocence, suggesting he had “nowhere to go”. He commented: “I’ve looked at the video and I think it’s harsh. 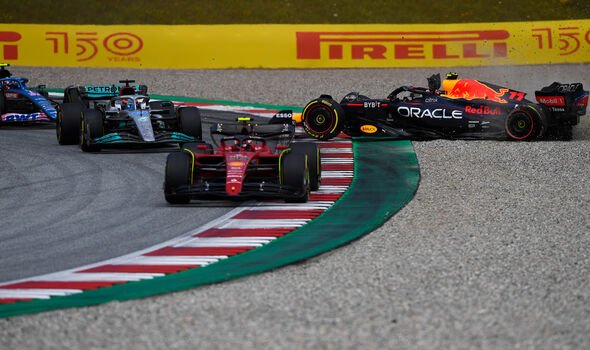 “You are racing at the start, cars are everywhere. Checo did do a bold move going around the outside like that. Obviously he’d done it before, he did it with Valtteri yesterday and Valtteri had to get right on top of the kerb to avoid him, which is exactly what I tried to do.

“But with Carlos ahead of me there’s only so much you can brake and so much you can steer, and ultimately I had nowhere to go.” However, Perez refused to accept he was at fault for the collision as he was “clearly ahead” at the corner.

He added: “It was up to George to really control his car which he clearly couldn’t, and we ended up making contact,” said the Red Bull man. There was nothing else I could have done. I gave him enough room; I was already very close to the gravel to make sure he had enough room for both of us to make the corner.”