There was always the potential that Formula One’s season finale would revolve around Michael Masi, the under-siege FIA race director, but few imagined it would be to such a degree.

By choosing to allow the lapped cars between Lewis Hamilton and Max Verstappen to overtake, and resume green-flag racing with just one lap to go of the Abu Dhabi Grand Prix on Monday (AEDT), Masi played into the hands of Red Bull and gave their driver the chance he needed on fresh tyres to overtake Hamilton and claim his first world title.

This season, Masi’s influence has been more prominent than at any time since he took the job in 2019. The teams’ radio feeds to him have been broadcast live around the world, adding to the spectacle, while also bringing more scrutiny.

The Australian, as the final grand prix proved, is capable of shaping not just an entire race but a full championship. It is no surprise then that he comes under so much pressure from warring teams.

It was his decision to deploy the virtual safety car when Antonio Giovinazzi parked his Alfa Romeo on the exit of turn nine, allowing marshals the safe environment needed to retrieve the stricken car. But even then, Masi was being lobbied by Mercedes team principal Toto Wolff, who pleaded: “No safety car please, Michael. It interferes with the racing.”

It was also his decision to call on the safety car when Williams’ Nicholas Latifi hit the wall at turn 14, which, with just five laps remaining, looked to have delivered a flat finish to what had been one of the all-time great title duels. 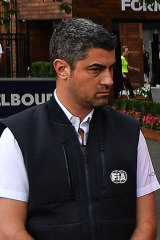 But Masi would have one more instrumental call to make, and after Wolff’s adversary Christian Horner offered his thoughts from the Red Bull pit lane, he elected to finish the season with a one-lap shootout for the championship.

Hamilton, on tyres well past their best, knew he had no chance of fending off Verstappen, who had just stopped for fresh tyres. Mercedes knew it, too, as an enraged Wolff berated Masi on the team radio.

Masi had been forced to intervene no fewer than four times at the previous week’s Saudi Arabia Grand Prix, but that event paled in comparison to the Abu Dhabi drama.

It was by far the most delicate situation Masi has had to deal with since replacing the late Charlie Whiting as race director following his sudden death on the eve of the Australian Grand Prix in 2019. The 42-year-old is the race director and safety delegate for every grand prix. He took on the role having worked at just nine previous races.

It is Masi’s job to know everything that is happening at any given time on a race weekend. Collisions, drivers exceeding track limits, the deployment of the safety car and enforcing FIA rules are some of the issues he must deal with.

It had been expected that Verstappen’s robust tactics when fighting against Hamilton would be Masi’s biggest concern in Abu Dhabi.

Masi had warned that driving in an unsportsmanlike manner could result in suspension or lost points.

He singled out a regulation which deals with “any infringement of the principles of fairness in competition, behaviour in an unsportsmanlike manner or attempt to influence the result of a competition in a way that is contrary to sporting ethics”.

However, his decision to allow the race to resume caused a storm and brought with it serious ramifications not just for the end of the 2021 campaign, but quite likely for following years, too.

This will not be the last time you hear the name Michael Masi.