Max Verstappen has praised his Red Bull for turning around his fortunes to take pole by the tightest margin of the season at the Dutch Grand Prix. Verstappen was just two-hundredths of a second faster than Charles Leclerc but did benefit from a late Sergio Perez crash. 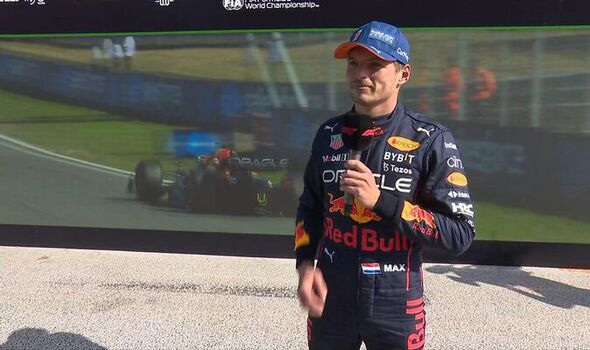 He said: “Unbelievable! Especially after yesterday, we worked really well overnight to turn it around. A qualifying lap around here is insane. Today the car was enjoyable to drive.”

Leclerc had managed to pip Vertsappen to provisional pole during the first run in Q3. There was then some concern the session could get red flagged after another flare was spotted on the side of the track.

Leclerc lost time in the second sector on his final run which opened the door for Verstappen to pip him by less than one-tenth. However, Mercedes were unable to get a clean run at the end after Perez lost control and spun at the final corner.

Leclerc looked devastated after the session after realising how close he was to grabbing his first pole since the French Grand Prix. However, the Ferrari star warned Verstappen may not have it their own way tomorrow based on race pace.

Speaking after the session, Leclerc explained: “Max did a great lap in the end, our car was getting better and better. In the beginning I was scared because Max was much quicker than us on used tyres.

“We are much stronger here compared to last weekend, and our race pace looks quite strong. We need to do a great start and then we’ll see.”