Verstappen was leading and in complete control of the Azerbaijan Grand Prix when, with just five laps to go, he suffered a rear-left tyre failure on the fastest part of the track and careered into the wall at 190 miles per hour.

It was a sudden, scary incident that was a near carbon-copy of the incident that took Aston Martin driver Lance Stroll out of the race earlier in the Grand Prix.

It meant the spotlight was placed firmly on tyre manufacturer Pirelli, whose product suffered two spectacular, and dangerous, failures during the race around the streets of Baku.

Pirelli have promised to undertake a full investigation into the two tyre failures, both of which came with no warning, with the manufacturer’s F1 boss Mario Isola suggesting on race day that the blowouts could have been caused by debris on the track.

But that theory was rejected by Red Bull and Verstappen, who hit out at Pirelli and said that he was fortunate to walk away from such a sudden, high-speed crash on a circuit with no run-off.

“It is certainly life-threatening,” Verstappen said after the Grand Prix. 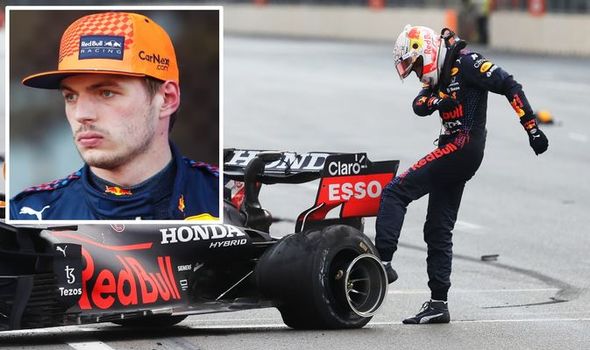 “I can also suddenly go left and then of course you end up in the wall at a completely different angle.”

Verstappen said things could have been even worse had his car veered left, where the entrance to the pit lane and the start of the pit wall would have presented even more dangers.

Had the blowout occurred further down the track, it would have seen him lose control at 200 miles per hour.

“A little further on, the speed is even higher. I was going about 305 kph (190mph), so nice and easy,” he said, somewhat sarcastically.

“Pirelli will probably say it has to do with debris. You will never get the full answer to that.

“So at some point the debris has to be gone. I don’t think it’s that, although Pirelli will of course give a different answer.”

Verstappen told Sky Sports F1 how the tyre failed, denying him a maximum-point haul to extend his championship lead over Lewis Hamilton.

“The tyre just blew off the rim,” he explained.

“It’s not a nice impact to have. It was quite a dangerous place to have a tyre blowout at that speed.

“But, yeah all fine with me. The car, not so much!

“Up until then, we’d had a very strong race. I was basically matching the lap times I had to do behind and we were fully in control. It was very disappointing what happened.

“We lost out on a lot of points and could have opened up a gap in the championship.

“This happening, especially so close to the end, was very frustrating.”

Verstappen’s spectacular crash, through no fault of his own, left him with a DNF and zero points for the weekend.

The only saving grace for the Red Bull driver was the fact that Hamilton, after a disastrous brake issue on the subsequent restart, also finished outside the points, meaning the Dutchman’s four-point championship lead remains intact.