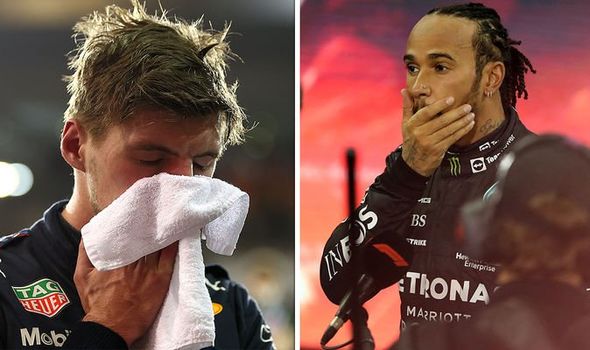 Hamilton was on course for his eighth world title with six laps remaining as he was cruising 11 seconds ahead of his Red Bull rival.

However, Williams star Nicholas Latifi crashed into the barriers and the field closed up under the safety car.

Verstappen also stopped for new tyres and a controversial few laps behind the safety car followed.

Racing resumed with one lap remaining and the 24-year-old claimed his first world title with a magnificent overtake on Hamilton.

However, Mercedes have launched two protests in the hope of stripping Verstappen of his crown.

Sky Sports F1 expert Ted Kravitz has suggested that Verstappen could be slapped with a five-second penalty if he is found guilty of passing Hamilton before the line at the restart on the final lap, which is one of Mercedes’ complaints.

Hamilton was less than five seconds behind Verstappen so such a penalty would hand him the title.

Another option has been suggested by Martin Brundle, who thinks Mercedes may push for the final lap to be cancelled.

“Mercedes will obviously say they want a lap count back, I’m not sure where the regulation or the precedent would be for that,” Brundle said on Sky Sports F1.

“The purpose of letting lap cars out of the way… it was brought in to stop them interfering in the main race at any phrase of the Grand Prix.

“Was it done fairly? I believe the lapped teams were pushing for information, Michael Masi didn’t want to let them through while there was a breakdown truck and marshals on the track.”

If the final lap is cancelled then Hamilton will be crowned champion as he was leading the race.

The first protest read: “Protest by Mercedes-AMG PETRONAS Formula One Team against Car 33, alleged breach of Article 48.8 of the 2021 FIA Formula One Sporting Regulations.”

The second read: “Protest by Mercedes-AMG Petronas F1 Team against the classification established at the end of the Competition, alleged breach of Article 48.12 of the 2021 FIA Formula One Sporting Regulations.”