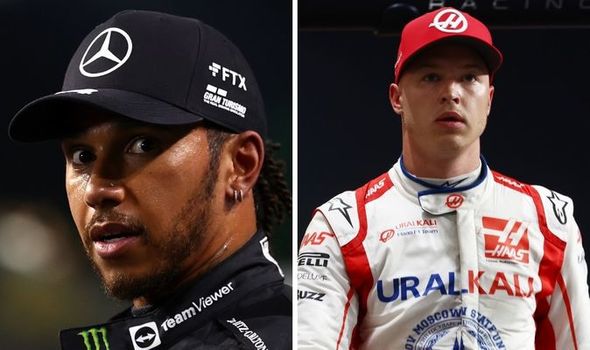 Lewis Hamilton clinched pole in a dramatic qualifying session on Saturday, but was involved in a hair-raising moment earlier on in the day. The Jeddah Corniche Circuit has attracted plenty of attention this weekend with drivers from all garages fully aware of the dangers of the track.

Charles Leclerc’s crash on Friday in FP2 was more evidence of how focused the drivers must be at every moment.

The Jeddah circuit boasts more corners than any other track on the 2021 F1 calendar with a total of 27 and many of them are blind to incoming drivers.

With the drivers reaching an average speed of around 160mph, there is very little room for errors on track.

The qualifying session saw plenty test the limits of their car with Carlos Sainz twice being fortunate to avoid a crash into the wall.

Max Verstappen though missed out on a chance to clinch pole after crashing out on his final flying lap with Mercedes locking out the front row.

Hamilton sits on pole, but it wasn’t all smooth sailing for the seven-time world champion on Saturday.

He was reprimanded for impeding Haas driver Mazepin during FP3 with Mercedes being handed a €25,000 fine.

Through turns seven and eight, Mazepin was flat out through the blind apex before being forced to take evasive action to avoid colliding with Hamilton.

No further punishment was handed down to Hamilton, but the British racing superstar was keen to stress to Mazepin how sorry he was for the scary incident.

“I was on a fast lap and I was going through turns seven and eight which are flat in our car,” Mazepin said.

“They are all blind and I didn’t know there was a car on the racing line so I kept it flat until a moment I saw he was not going to move from it.

“Not a big deal from my side, we train to have the reactions necessary to deal with these situations and Lewis has been very nice.

“We have sent each other texts about that. I just hoped he had a good qualifying and he did as always.

“He felt very sorry for what happened and said it wasn’t the best job done from their side.

“It is very nice to see experience in the older generation and really paying attention to these things because in F2, you might never get a driver thinking about it whereas in F1, a seven-time world champion is.

“That is really kind from him.”