Lewis Hamilton sent a message to rivals Max Verstappen and Charles Leclerc after the Brit secured his best finish of the season at the French Grand Prix. The 37-year-old believes that Mercedes can challenge Red Bull and Ferrari in the next race at the Hungarian Grand Prix as they have the pace to match the top two teams.

“That was a tough race because my drinks bottle didn’t work!” Hamilton said as he revealed he could have lost three kilograms during the race. The Brit went on to praise his team for the work they did. He added: “Reliability is the one thing we’ve been amazing at, George [Russell] did an amazing job as well!

“I’m looking forward to downing this drink! Super excited to see the crowd there [in Budapest], it’s going to be hard to beat the Ferraris and Red Bulls but you see in the race we have the pace.”

Hamilton collapsed to the floor in the cool-down room after the race as he struggled without his drinks bottle, but managed to keep his cool enough to secure second place behind Verstappen. 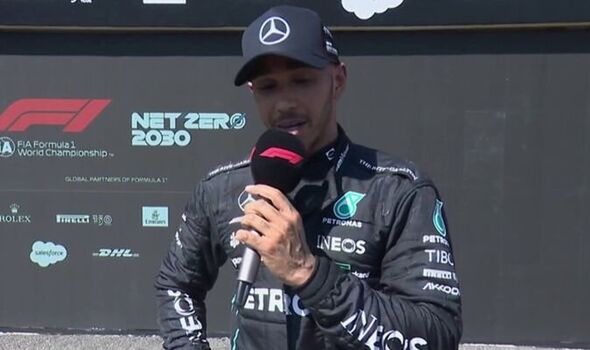 After finishing the race Hamilton took to his team radio to thank his team and praise his team-mate. “Great jobs guys,” Hamilton said. “That’s an incredible result, shows what an incredible job we are doing. Well done George.

Russell snuck onto the podium alongside the 37-year-old after he dropped back before overtaking Sergio Perez at the restart with just two laps remaining. This is the first time all season that Mercedes have had two drivers on the podium. 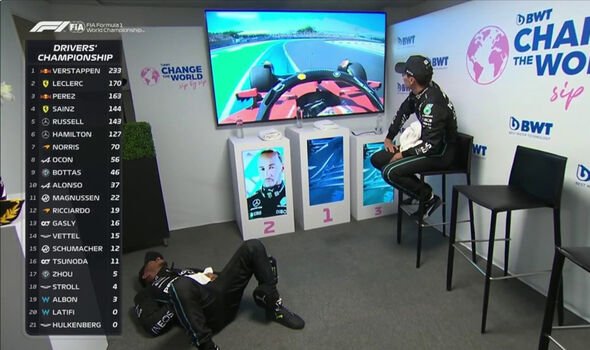 “I’m sweating and a bit knackered now to be honest,” Russell said in the French heat after the race. “The pace was strong but we really struggled with the warm up on that restart and Checo was all over me. I was glad to see that chequered flag and come home with P3. Two podiums for Mercedes is great.”

The seven-time world champion was able to move into second following Leclerc’s crash at Turn 11. The Monegasque racer lost control during sector two and was sent spinning into the wall.

Hamilton shortly took the lead before he pitted and then stayed behind Verstappen in second for the majority of the race having fended off Perez.