Qualifying typically determines the grid order for Sunday’s race but Monza is playing host to the second ever Sprint Race which will act in its place.

Lewis Hamilton and Max Verstappen will be looking to take pole position for tomorrow’s 30-minute race which will then determine the grid for Sunday’s main event.

The Dutchman arrives into the Italian Grand Prix with momentum on his side after his home victory at Zandvoort last week.

Follow Sportsmail’s Kieran Lynch for live Formula One qualifying coverage of the Italian Grand Prix, including build-up, updates and result.

It’s been a hectic week in the driver market with the big news that George Russell will drive alongside Lewis Hamilton at Mercedes in 2022.

He replaces Valtteri Bottas who joins Alfa Romeo to replace the retiring Kimi Raikkonen. Talking of the Iceman, Raikkonen is not in action this week following his positive Covid test before the Dutch GP and Robert Kubica will again stand in his place.

Also good news to see Alex Albon will be back on the grid in 2022. The former Red Bull driver replaces his good friend Russell in the vacant Williams seat. 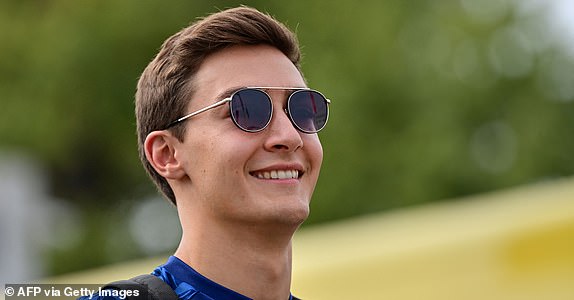 The tow at Monza is hugely powerful in comparison to most other tracks and in past years you have seen drivers squabbling for position to set themselves up for the perfect lap.

It led to some hairy moments last year with Kimi Raikkonen almost clattering into the back of Esteban Ocon.

So don’t be too surprised if the first part of qualifying in particular turns into a bit of a mess!

If there was any circuit on the F1 calendar you would expect to suit the Mercedes package then it is Monza.

As you might remember the Sprint Race format was first introduced for the British Grand Prix weekend earlier this season.

That time Lewis Hamilton took pole on Friday but started the Grand Prix in second after losing out to Max Verstappen in the Sprint Race. And we all remember what happened between Hamilton and Verstappen that weekend!

There is still doubt in the paddock over the format and whether it should be used going forward so should be an interesting weekend to see how it plays out this weekend.

And welcome all to Sportsmail’s live coverage of Friday qualifying ahead of the Italian Grand Prix.

When there’s qualifying on a Friday you know something’s different this weekend and that’s because the Sprint Race format is back for the second time this season.

Kieran Lynch here with you today and I’ll bring all the build-up, updates and result with the session set to get underway at 5pm.