When Extreme E came to the Saudi Arabian desert region of AlUla earlier this month, it had two missions. One was to put on a show, with fully electric SUV cars searing through sand in between giant outcrops of sandstone rock. The other was more subtle, bubbling away in the background.

Ahead of its debut race, Extreme E aspired to be more than just thrilling motorsport but to enact change in the world as it went. Organisers wanted to help tackle the climate crisis via a three-pronged approach: the first was to promote the use of electric vehicles; the second was to raise awareness of key climate issues at each location, in AlUla’s case the problem of desertification; the third was to leave a lasting environmental legacy behind them.

AlUla is a diverse natural and archaeological treasure trove: part of the longest continuous desert in the world and home to the UNESCO World Heritage site of Hegra, where more than 100 perfectly preserved tombs remain on display 2,000 years after they were first intricately carved into the landscape. Only recently has the region opened its doors to the world, inviting tourists to experience not only its breathtaking natural and historical wonders but its growing collection of modern attractions, like the adventure trails and the 100km/hr zipline that soars over the valley, or the Maraya, a multi-purpose conference and entertainment venue and the world’s largest mirrored building which has played host to artists such as Andrea Bocelli as well as the GCC Summit and Nobel Laureates Conference in 2020.

But AlUla faces a challenge to meet the demand of growing interest in the region with preserving exactly what makes it special. In short, AlUla wants to make tourism sustainable, a way not just to appreciate the area but to enrich it.

This is why Extreme E equipped an ex-military vessel to accompany its voyage around the globe, complete with a full scientific team and laboratory. The goal is to undertake projects in every region while raising awareness of the specific problems of climate crisis at each race location, starting with the spectacular desert which millions watched on TV around the world last weekend. 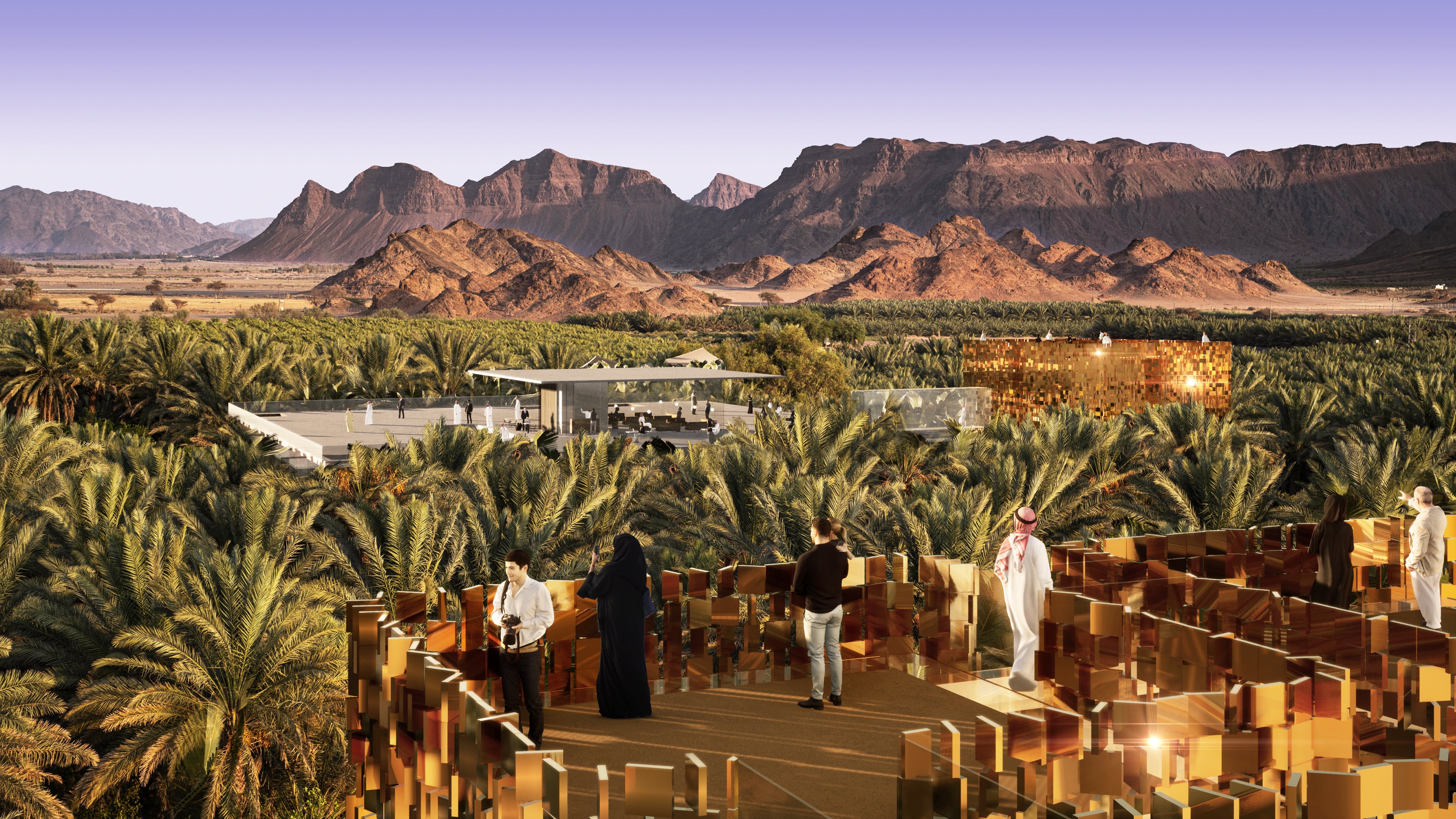 “It can’t get much drier here,” says Professor Richard Washington, one of Extreme E’s lead climate scientists, speaking to The Independent last week trackside. He is explaining the challenges ahead for areas such as AlUla, and why it was chosen as the landmark destination to begin the new series.

“The fringes of the desert are prone to the process of land degradation and decreasing aridity, which is the working definition of desertification,” Professor Washington says. “Desertification is one of the biggest things that we can see in rainfall records for decades, and that’s one of the themes of this race location. AlUla is part of an entire interconnected climate system which is changing and having knock-on effects.

“In southern Africa the rains are predicted to start late because of the amount of heating that’s going on. We’re already seeing that in the observational data, and when the trends in the observed and the trends in the predicted line up, it gives you the best shot at adaptation. You can put in place things now that you have confidence will work later as well. So being here, there’s a nice hook with desertification through to other parts of the world and the connectivity of the entire climate system. Of course it’s beautiful here too! That helps.”

The interconnected nature of the climate system is why plans to plant a billion trees in the AlUla region before 2030 will have benefits not only for the local area but for parts of the planet far beyond the Middle East. Tree planting will stabilise the area against the surge of desertification and redresses the issue of carbon emissions, as the country greenifies its energy consumption from fossil fuels to renewables.

“Extreme E has contributed 25,000 trees to AlUla as well as funding towards conservation,” explains Louisa Tholstrup, Extreme E’s official Explorer leading their Legacy Programme. “Here in AlUla we’ve been planting native citrus and acacia trees as part of the project.”

It is not just the scientists hoping to make an impact while in AlUla. “I’m working together with an initiative from Prince Charles, which he launched 20 years ago, called Turquoise Mountain,” says the former Formula One world champion Nico Rosberg, speaking after his team won the opening Desert X Prix. “It’s really about fostering the ability for the locals to keep making money with their crafting. There are crafts that they’ve had for thousands of years, so we want to really empower the women in particular with their skills and really allow them to keep selling their crafts and to make a living from it.

“So one side of the race is really trying to engage everyone to join the journey with us, so that everybody does their part, and then locally, it’s actually having an impact as well, by supporting the projects in AlUla. And that’s not only financially but with resources – one of our biggest sponsors is going to be supplying photo equipment laptops so that local people can actually create an online shop and sell all their crafting online. So all this is the direct impact that we’re having.”

This, ultimately, sums up the great hope here: that Extreme E’s legacy will remain in AlUla long after the gentle whir of electric SUVs has departed.