Ferrari’s Charles Leclerc will line up alongside the Dutch driver on the front row after a scrap for second with Spanish teammate and British Grand Prix winner Carlos Sainz, who finished third. 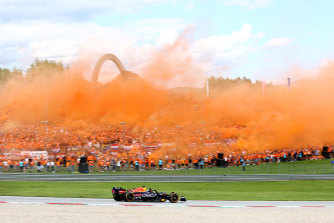 Max Verstappen waves as he drives past his fans.Credit:Getty Images

The victory at the Red Bull Ring stretched Verstappen’s championship lead to 38 points over teammate Sergio Perez, who finished fifth after starting 13th. Leclerc is six points further back.

“It was a decent race. We had a good pace at the beginning and after that we were very closely matched. It was good, it was like a sprint should go, quite flat out,” said Verstappen, who had qualified on pole on Friday.

“The car is good. Just a few things to fine tune but overall we’ve been really competitive again this weekend,” added the 24-year-old, who took the chequered flag 1.675 seconds clear of Leclerc.

Verstappen also won the season’s previous sprint at Imola in April and his army of Dutch fans let off flares to send clouds of orange smoke billowing from the stands before and after the 23-lap race.

Hamilton said he had been stunned to hear spectators cheered when he crashed hard in qualifying on Friday.

Verstappen had been on the receiving end of boos and the wrong sort of cheers at Silverstone, Hamilton’s home race, last weekend.

Red Bull’s championship leader was booed when he qualified on the front row and cheered when he slowed in the race, a puncture and car damage dropping him from the lead to seventh.

“I was going through a bunch of stuff in the crash, but to hear it afterwards you know … I don’t agree with any of that, no matter what,” said Hamilton of the cheers after he hit the tyre barrier at speed. 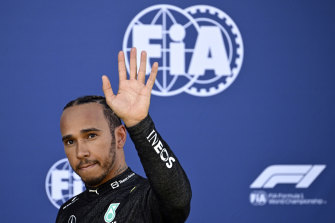 Lewis Hamilton waves as he walks back to the pits after his crash in qualifying.Credit:AP

“A driver could have been in hospital, and you are going to cheer that?

“It’s just mind-blowing that people would do that, knowing how dangerous our sport is. I’m grateful that I wasn’t in hospital and I wasn’t heavily injured,” added the sport’s most successful driver.

Verstappen said after the sprint that it had been great to see all the fans.

“You know there is a lot of orange around here, and you could hear them cheering. So that was very nice, for sure,” said the 24-year-old.

Alpine’s Esteban Ocon was sixth, the Frenchman stopping on track after the chequered flag, with Kevin Magnussen seventh for Haas.

The sprint race awards points to the top eight, with the winner taking eight.

Ocon’s teammate and twice world champion Fernando Alonso failed to start the sprint after his car remained jacked up on the grid with tyre blankets still on.

It was then pushed back into the garage with Alonso to start at the back on Sunday with Aston Martin’s four-time champion Sebastian Vettel the only other retirement.

“We couldn’t switch on the car on the grid, so we moved into the pit lane and then we tried an external battery, but there were still no signs of it switching on and we had to retire,” said Alonso.

The field did a second formation lap after Alfa Romeo’s Chinese rookie Guanyu Zhou stopped, sending him to the pit lane from where he fought back to 14th.

He is expected to start 13th on Sunday, with teammate Valtteri Bottas set to go to the back of the field due to a power unit change.

Leclerc passed Sainz on lap one but the Spaniard remained on his tail, trying to retake the position in a battle that would have done little to calm the nerves of Ferrari bosses on the pit wall.

“Probably tomorrow we cannot afford to do what we did today,” said Leclerc, mindful of tyre wear.

Hamilton started ninth but made contact with Pierre Gasly’s AlphaTauri on the opening lap, dropping to 11th. The Briton then battled back but had a tough and lively battle with Mick Schumacher for eighth.

“It was very cool to see Mick holding off a seven-time world champion. It was very good team work and I’m pleased with the result,” said Haas team boss Guenther Steiner.

Schumacher, who was passed on the penultimate lap, was summoned to the stewards after the race for alleged ‘starting procedure infringements’ along with six others but no further action was taken.

Williams’s Alex Albon was punished, collecting a five-second penalty for forcing McLaren’s Lando Norris off the track on lap four. He also tangled with Vettel.