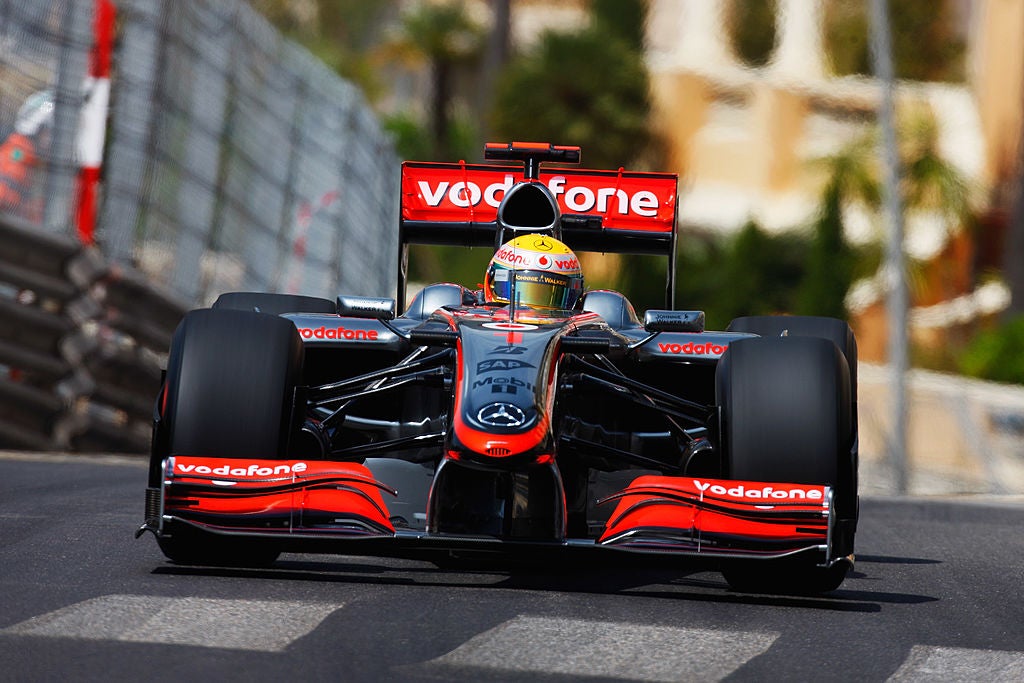 Ferrari started the 2008 Formula 1 season in fine fashion, and appeared to be the dominant team as Hamilton lined up in third behind Massa and Raikkonen.

With a wet race start, Hamilton moved past Raikkonen effectively but struggled when taking on Massa, and the Brit punctured his right-rear tyre as he hit the barrier on lap six.

He came out the pits with more fuel and had remarkably only dropped to fifth – and Hamilton’s early stop ended up helping him immensely.

When the leading cars pitted for their scheduled stops, Hamilton took the lead.

The torrential conditions meant the two-hour time limit was met before the standard 78 laps, and this shortened race proved to be perfect for Hamilton and McLaren as he suffered another puncture before crossing the line for his maiden Monaco victory.

Heading into the first Formula 1 Grand Prix in Austin, Lewis Hamilton was already out of the 2012 championship fight.

Starting second, Hamilton and rival Sebastian Vettel made their stops but were split by Kimi Raikkonen’s Lotus.

Hamilton used DRS to move past the Finn, and Vettel’s lead was just under 2.5 seconds. The Brit continued to press, but the German’s Red Bull was proving to be just too quick for his McLaren.

However, Vettel got stuck behind a slower car and it allowed Hamilton to get within DRS range and take the lead on lap 42 before narrowly holding on to take the win.

“He had one chance to pass, and he took it,” said Vettel, who finished just 0.7 seconds behind. 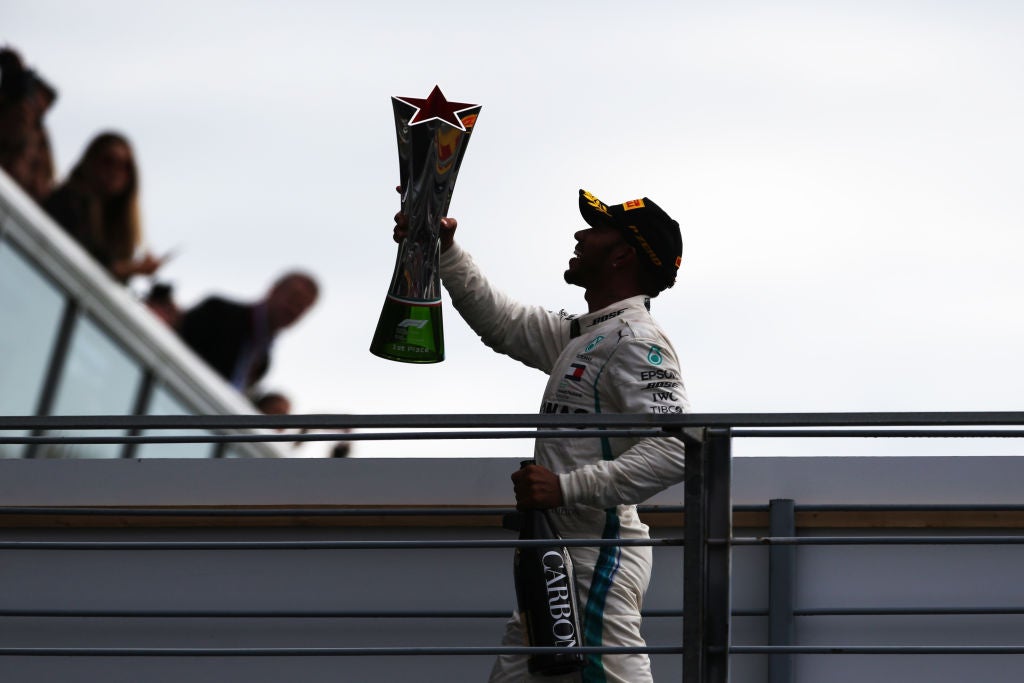 Lewis Hamilton lifts the trophy on top of the podium

Hamilton’s Mercedes was clearly not the fastest car heading into the race, with the Ferrari duo of Sebastian Vettel and Kimi Raikkonen qualifying ahead of him.

As the teammates battled for the lead heading into the second chicane, Hamilton moved to the outside and went the long way around Vettel. The German attempted to respond, but clipped the Mercedes and dramatically spun.

Following a safety car, Hamilton took the lead but quickly lost it to Raikkonen.

At the beginning of lap 45, Hamilton made his move on the long straight. With the Ferrari defending the inside, the Mercedes moved to the outside for the first chicane after braking later to take the lead.

From there, Hamilton pulled away to win his fifth race at Monza, equalling Michael Schumacher’s record at the famous circuit.

Last season’s victory at Monaco was an incredibly emotional one following the death of Formula 1 legend Niki Lauda, who had been influential in persuading Hamilton to join Mercedes.

After achieving pole position, a safety car on lap 11 sent the cars to the pits with Mercedes opting to put mediums on Hamilton whilst his rivals went for the harder option.

The decision left Hamilton with an enormous task of going 67 laps on his current tyres. The Brit voiced his concerns over radio as he attempted the incredibly difficult challenge of keeping Max Verstappen at bay.

On lap 76, the Dutchman made a move for the lead. His Red Bull was right behind the limping Mercedes, so Verstappen attempted an audacious move down the inside of the chicane after exiting the tunnel. The two made contact, but it wasn’t severe and Hamilton went on to win.

He said: “I think it was one of the hardest races I’ve had.

“I definitely touched the barrier a lot of times.”

This is a particularly impressive win for Hamilton, as this is his only win starting from outside the top 10 on the grid. With championship leader Vettel on pole, the Brit’s Mercedes was down in 14th following mechanical issues.

Hamilton began his long climb up the standings rather impressively, moving into fifth on lap 14 before finding himself in fourth after the pit stops.

With rain beginning to fall, on lap 52 – with a nine second lead over Bottas – Vettel locked up at the Sachskurve in front of his home fans, and slid into the gravel.

Out came the safety car, and whilst Bottas and Raikkonen changed their tyres, a miscommunication on the radio meant Hamilton stayed on track, driving over the grass.

Now in the lead, Hamilton was set to defend from Bottas but Mercedes intervened, and the Brit went on to win one of his greatest challenges.

“I knew there was the possibility to win when it started to rain,” said Hamilton. 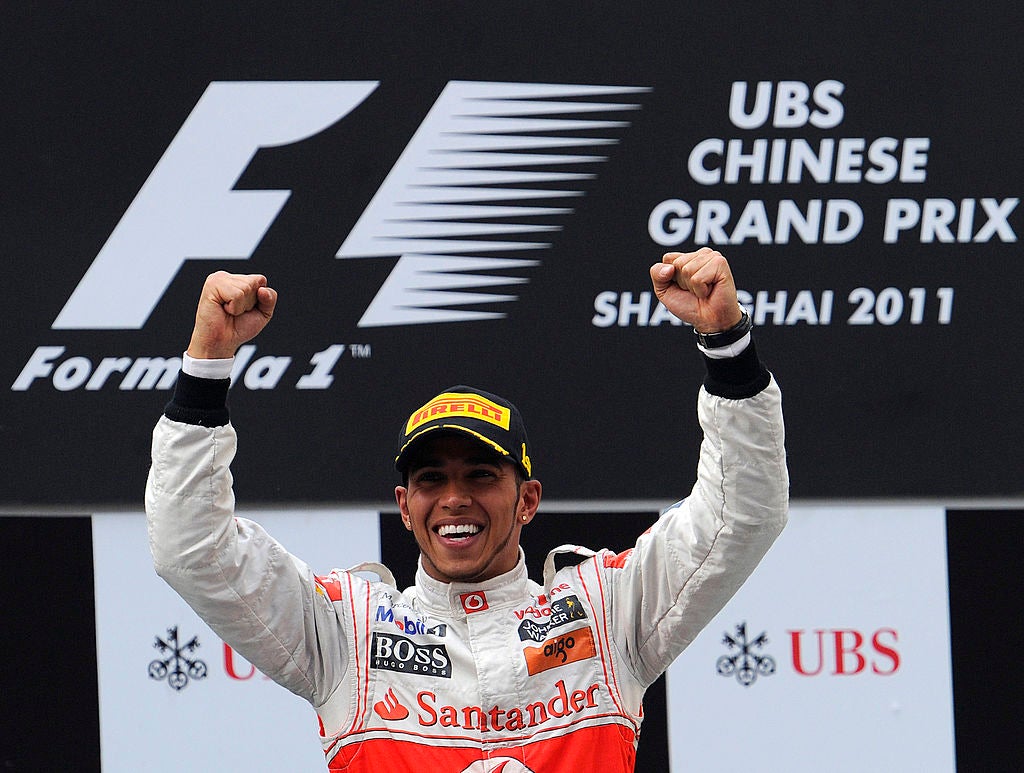 Following some severe mechanical issues, Hamilton only just made it to the grid in China where he lined up in third.

After a strong start that saw him overtake Vettel’s Red Bull, Hamilton found himself fifth after going to the pits.

Before his final stop, Hamilton dived down the inside of teammate Jenson Button before passing Nico Rosberg’s Mercedes and Massa’s Ferrari with 12 laps to go.

Lewis only needed six laps to negate the 4.6 second advantage of Vettel, and despite some stern defending from the German, the McLaren took the lead with an exceptional move heading into turn seven.

Hamilton said: “This race is in my top three of race wins, up there with Silverstone and Monaco in 2008.”

Rosberg went into this race leading the championship, and qualified on pole as he eyed potentially extending his lead.

However, Hamilton took the lead on the inside of the first corner and the two pulled away from the rest of the field.

Rosberg had the better tyres and after a safety car, he had 11 laps to try and overtake Hamilton. The German attempted to take the lead several times, notably with six laps to go as the two duelled from turn one through to turn four.

Each time Rosberg tried to surpass Hamilton, the Brit held on. Despite the German setting the fastest lap and starting on pole, his teammate bested him in Bahrain. 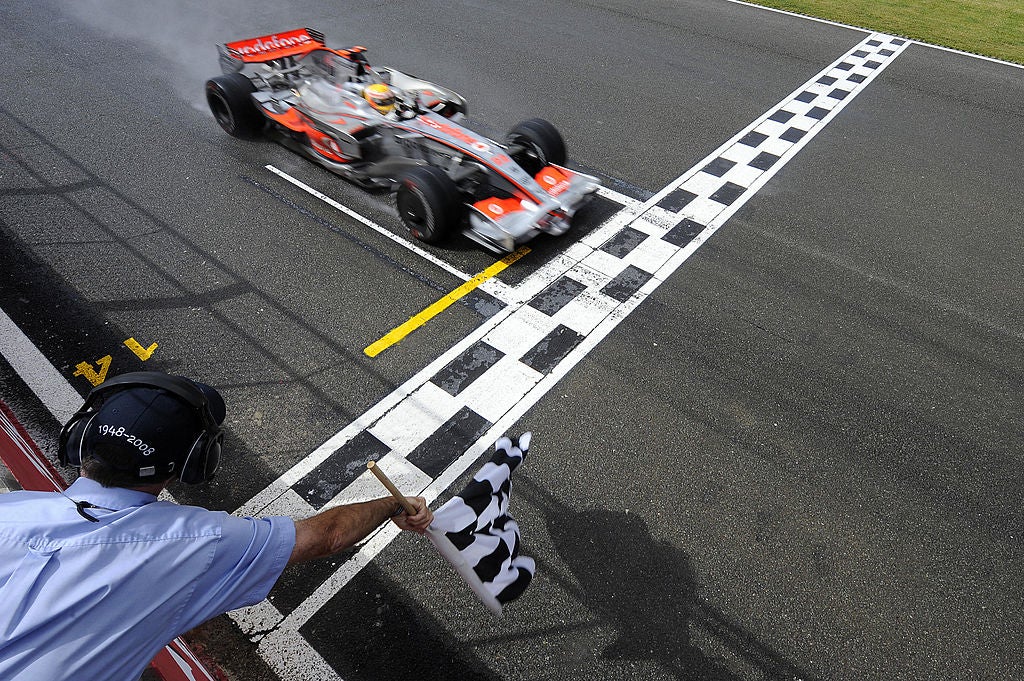 Starting on the second row in awfully wet conditions at Silverstone, Hamilton got off to a brilliant start and almost overtook his teammate Kovaleinen, who started on pole.

Hamilton took the lead on lap five despite having trouble with a misting visor and he drove brilliantly, perfectly wearing his tyres as others faltered.

With Raikonnen now in second, the two headed into the pits and Ferrari kept the Finn on the same set of intermediates, whilst McLaren gave Hamilton a new set.

The rain duly returned and Hamilton’s tyres were far-better equipped to deal with the conditions.

After just five laps following the pit stop, Raikkonen was 22 seconds behind Lewis.

Hamilton swapped onto new intermediates rather than extreme wets, but the Brit was flying on the compound that was perceived to be slower. As the track dried, his lead grew.

In the end, Hamilton finished a full minute and almost nine seconds ahead of Heidfeld, who was second. The Brit lapped everyone but his fellow podium-sitters in a commanding performance that is still heralded to this day.

David Alaba will be in demand after Bayern Munich talks failed