Home » Racing » Ferrari are back, ‘pain’ for Ricciardo: What we learnt at Bahrain GP

The opening race of the 2022 Formula One season picked up where the last campaign left off as a late safety car and last-lap drama in Bahrain produced no shortage of talking points.

The sight of a Ferrari one-two could not have been imagined when the 2021 campaign ended last December, but Charles Leclerc held off a charging Max Verstappen to fend off the reigning world champion and lead home a precious victory for the Italian team, with teammate Carlos Sainz second thanks to Verstappen’s late retirement.

The fuel supply issue that ended the Dutchman’s race prematurely also affected his teammate Sergio Perez at the start of the final lap. It caused the Mexican to spin under pressure from Lewis Hamilton and end his race, agonisingly, one lap short. It handed the seven-time world champion an unlikely podium finish, on an evening where Mercedes had clearly found themselves third-best in the 2022 pecking order.

So what did we learn from the opening race of the season?

“Ferrari are back, really back,” said Sainz after claiming second place behind teammate Leclerc in Bahrain. The Spaniard was not wrong. This was Ferrari’s first win since Sebastian Vettel took victory in Singapore in 2019. It has been a bleak period for the Scuderia, but the reboot in the technical regulations has clearly worked for them. It is not just the chassis, either. Ferrari’s engine looks to have made a dramatic leap – or at least achieved parity with the Mercedes given it was clearly down on power last year – if the performances of Ferrari-driven Haas and Alfa Romeo, who took fifth and sixth through Kevin Magnussen and Valtteri Bottas, are anything to go by. 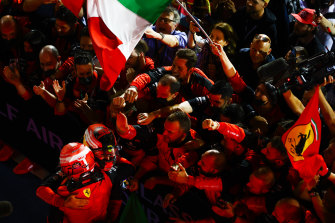 Hamilton made a valid point in his post-race press conference, arguing his third-place finish was not just down to pure luck. “Obviously we were fortunate, but we’ve done a better job,” said the Mercedes driver. “We have reliability. It’s not luck, it’s the hard work of everyone.” The truth is, though, Mercedes were eight tenths to one second per lap slower than the front two teams. That is a massive gap. The fear is that it is still a two-horse race at the front of the grid, only one of the horses has changed. Either way, Mercedes have a lot of catching-up still to do, although Hamilton did claim the porpoising on his car was “a lot better” than it had been in testing.

McLaren are in deep trouble

While Mercedes were breathing a sigh of relief, banking unexpected points that they can use as a buffer as they play catch-up to Ferrari and Red Bull, the picture over at McLaren is grim. Daniel Ricciardo and Lando Norris were 14th and 15th out of 17 finishers, with Norris struggling to put a brave face on it afterwards. “I’m expecting pain and everyone needs to know there will be pain,” he said. “We have to get used to it.” 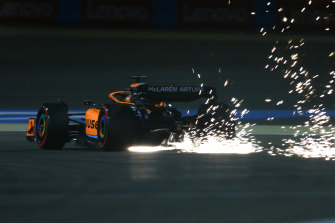 Perhaps a little harsh on Schumacher, but the Dane was a revelation on his first outing after a forced year-long sabbatical, placing his Haas fifth while Schumacher could finish only 11th. The young German had the beating of Nikita Mazepin last year, but it is clear that he is going to have to raise his game this time if he is to deliver on that early promise.

Jury still out on new rules

It is clearly far too early to judge whether these new cars, which were designed to allow closer racing, are actually delivering. The drivers seemed non-committal on the issue after the race, with Norris and George Russell reporting that it felt much the same. The thrilling battle between Leclerc and Verstappen, as they exchanged the lead five times in two laps, perhaps gave a false impression as both drivers still ultimately required DRS to make each of those passes. But you could also make a case that they were able to get into position more easily to make those passes. And given there was plenty of wheel-to-wheel action further down the grid, the hope will be that this action-packed curtain-raiser was a sign of things to come.