The dramatic championship battle between Lewis Hamilton and Max Verstappen returns to Austria with the Mercedes man in need of halting his Red Bull rival’s red hot form.

Verstappen, 23, opened up a 18-point lead over the seven-time world champion last time out at the Red Bull ring with an emphatic victory on his home track, making it back-to-back wins for the youngster.

However, Hamilton has shown signs of improved pace this weekend, topping practice on Friday and the Mercedes man will look to strike back in what is expected to be an enthralling qualifying session in Austria.

Follow Sportsmail’s OLLIE LEWIS for live Formula One qualifying coverage of the Austrian Grand Prix, including build-up, updates and result.

There are plenty of bromances in Formula One these days but these two are a classic pairing.

Sebastian Vettel turns 34 today. Decent birthday present to learn that his mate Lewis is sticking around in F1!

Lewis Hamilton has committed his future to Mercedes after putting pen to paper on a two-year deal with the all-conquering Formula One team.

Max Verstappen reasserted his dominance over Lewis Hamilton by racing to the top of the time charts in final practice for the Austrian Grand Prix.

How are the nerves?

The England game is still a few hours away but in the meantime we have some exciting action coming up in Austria with qualifying for the Austrian Grand Prix getting under way in an hour.

Max Verstappen enters this weekend’s action in confident mood having won the last two races and, if this morning’s practice is anything to go by, he will be tough to better this afternoon.

But Lewis Hamilton will be feeling buoyant having signed a contract extension with Mercedes and knows that it is time to start clawing back that 18-point deficit.

Stay tuned for build up and live commentary of qualifying from Austria. 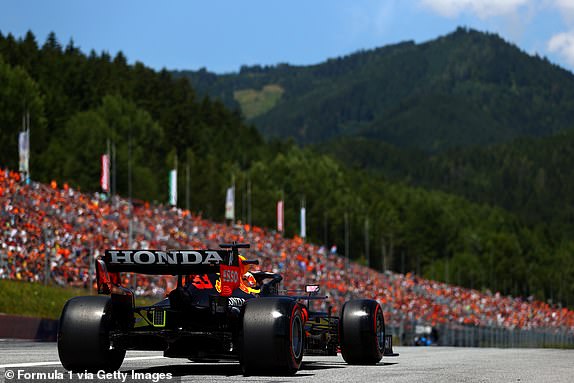