Daniel Airey doesn’t recognise the person he was at 16. It was the year he survived the worst months of his life: he was suffering from panic attacks up to three times a day and his mind was plagued by suicidal thoughts.

“It’s almost a feeling of losing control of everything … like someone else has control of you, your actions and everything that’s in your mind.” 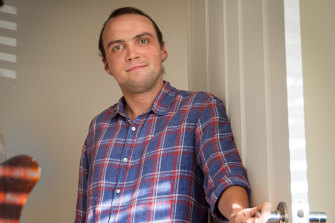 Airey had been bullied over elements of his identity – having a stutter and being gay – through high school, which took a toll on his mental health. His inner self-critic would roar that he was mucking everything up. He gradually began to avoid social situations and attending school. For a while he would only communicate by writing on paper.

“It was just this sense of ‘everyone’s watching me, everyone’s thinking about what I look like’ and all negative things,” Airey says. “In year 8 I just didn’t talk because it was so bad.”

Airey, now 22 and living in the outer Melbourne suburb of Sunbury, recalls that experiencing suicidal thoughts and panic attacks was particularly frightening.

“I opened up to my mum and my partner and I said ‘I don’t know what’s happening to me’.”

Airey, who tells his story for The Age and The Sydney Morning Herald’s youth mental health podcast Enough, was diagnosed with anxiety and depression in 2016, and placed on suicide watch. For several months he stopped going to school and his mum stopped working.

“I felt like a burden,” he says. “Having her always there made me feel like I wasn’t able to survive on my own, which looking back was true but … when I was fighting all these demons inside me, it was overwhelming.

“I remember saying to Mum … ‘you’ll be much happier if I’m gone’,” Airey says.

Through a combination of medication and cognitive behavioural therapy, things slowly improved. He returned to school and was accepted into university. He hasn’t experienced suicidal ideation since he was 17.

‘It feels like your life is over in that moment’

Airey can relate to the many young people who struggled during COVID-19. He’s disturbed by the finding of a recent survey of Australians aged 16-24 that a quarter had experienced suicidal thoughts during the pandemic. That figure is about double the number of adults aged 25 and older who’d felt suicidal.

“There isn’t enough help for all those individuals out there,” Airey says. “It feels like your life is over in that moment.”

Airey is relieved he didn’t feel suicidal during the pandemic, but his panic attacks returned after he lost work. Without his usual support networks through multiple lockdowns, he had to find new ways to cope. Running became a big outlet for him.

Beyond Blue’s chief clinical adviser Dr Grant Blashki says suicidal thinking is complex, but it commonly occurs with grief, break-ups, drug and alcohol use, unemployment, isolation and coming to terms with your identity.

I remember saying to Mum … ‘you’ll be much happier if I’m gone’.

He says that suicidal ideation – which is often associated with symptoms of depression – should always be taken seriously. People who suffer from persistent suicidal thoughts are more likely to end their lives.

Mental Health Australia this week called on the federal government to set a target to reduce suicide by 25 per cent by 2025. The latest available data from the Australian Bureau of Statistics shows that in 2020, there were 480 youth suicides, the same as in 2019.

Blashki says that while it’s a relief the rate didn’t go up that year, it’s clear that the pandemic has had a substantial impact on young people’s mental health.

He adds that “as society we have to do much better” to bring down the suicide rate. “It’s just unacceptable that it’s higher than the road toll.” 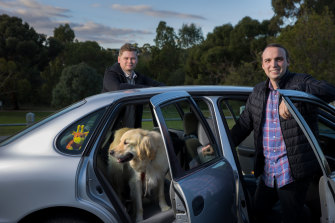 Daniel and his partner, Andrew, have recently opened up their home to foster children.Credit:Simon Schluter

Key to Airey’s recovery was becoming OK with asking for help whenever suicidal thoughts returned. “There’s no way I would … even contemplate it [now].”

Blashki says that people who are worried about a loved one should not be afraid to ask if they’ve had thoughts of self-harm or taking their life.

“There’s no evidence that you put the thought in their head,” he says. “Pick a good time and place to open up the conversation and listen … then you can point them to the right supports.”

Airey says that he does this with his friends who are struggling mentally.

“I just ask them outright, ‘are you experiencing suicidal thoughts?’,” he says. “It helps to talk about it when you’re in that place, and it reminds them that there are people who care about them.”

Airey says that creating more awareness of speech impairments is a big motivator for his involvement in the Enough podcast. Growing up, he lacked role models he could relate to.

“Having a stutter throughout my schooling, I was really put down as stupid or not as capable as the other kids,” Airey says. “But now I’m just like ‘well, it’s a part of who I am’.”

As his anxiety around his speech diminished, his stutter improved too.

For Airey’s partner of seven years, Andrew Grey, the transformation has been “life-changing”. “We had times where his mum and I had to pin him down to stop him from harming himself,” Grey says. “He’s a different person … I’m really happy.”

Late last year, Airey and Grey became foster parents – two of only six foster carers with Anglicare Victoria who are under 25.

“I emotionally invest myself heaps in these kids and empathise with them. At times it makes it harder, because I’m feeling it as well,” he says. “[But] it means I can help from experience.”

Airey would tell his 16-year-old self to “envision a future where anything is possible”.