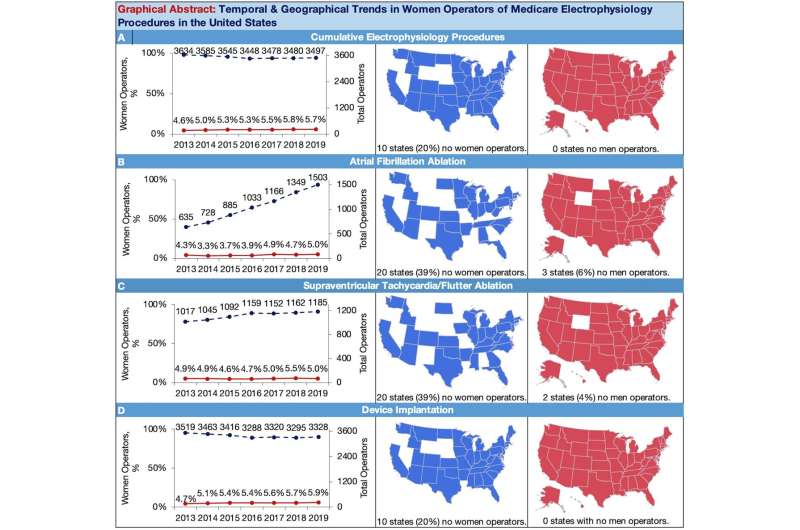 Not only is the representation of women compared to men in the electrophysiology workforce disparate and less than cardiology as a whole, but studies have also highlighted sex-based differences in salaries, Medicare reimbursements, and leadership of cardiovascular clinical trials.

“Our goal was to better define the representation of women in the electrophysiology workforce and what kind of progress, if any, has been made,” explained lead investigator Stacey J. Howell, MD, Section of Cardiac Electrophysiology, Division of Cardiovascular Medicine, University of California San Francisco, San Francisco, CA, U.S.. “We knew that women were poorly represented, but we did not know if that varied by specific electrophysiology procedure type or whether it had improved in recent years. It is a timely question since the importance of women in medicine, and broadly in the workforce, has garnered national attention recently.”

Results showed that, on average, annually between 2013–2019, only 5% (187) of the 3,524 electrophysiology operators included in the database were women. Procedure-specific analyses revealed a similarly low proportion of women electrophysiology operators across each procedure type. Despite a 137% increase in the total number of AF ablationists over the seven-year period, the proportion of women remained stagnant.

Co-author Babak Nazer, MD, Knight Cardiovascular Institute, Oregon Health and Science University, Portland, OR, U.S., added, “As a male electrophysiologist in a predominantly male field, I have had the privilege of working closely with several remarkable female colleagues in our field, including Dr. Cara Pellegrini and Dr. Stacey Howell. We hope that these findings, and future topics we plan to investigate, elucidate the barriers to growing female representation in our field, which I feel will benefit both our patients and ourselves.”

In an accompanying editorial, Kavisha Patel, MD, and Ulrika Birgersdotter-Green, MD, Section of Electrophysiology, Division of Cardiology, UC San Diego Health, San Diego, CA, U.S., noted that cardiovascular medicine ranked among the lowest in terms of female representation, and that the third decennial Professional Life Survey conducted by the American College of Cardiology, led by the Leadership Council of Women in Cardiology, reported that only 6% of female cardiologists identified themselves as practicing electrophysiologists. This is in contrast to the fact that three Heart Rhythm Society presidents in the past decade have been women, and there has been a steady increase in women physician speakers at major cardiovascular medicine conferences.