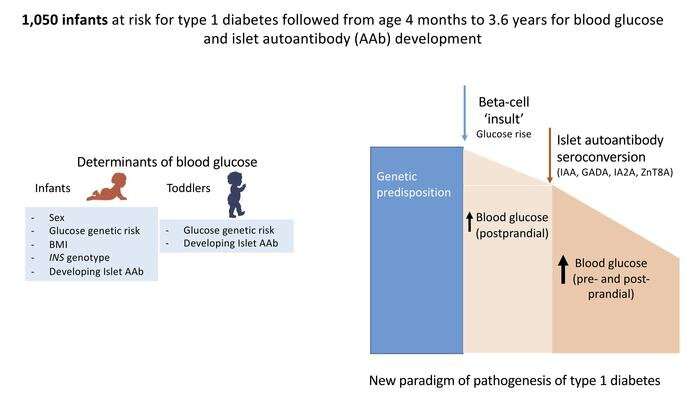 A new study provides novel insights on dynamics of blood sugar levels and autoimmunity in early childhood: When and why does type 1 diabetes manifest in children? For the first time, researchers conducted a long-term study on infants and young children with increased genetic risk of type 1 diabetes.

The results have now been published in the Journal of Clinical Investigation. The authors provide a unique picture of the dynamics of blood sugar regulation during early childhood and its relationship to the development of autoimmunity.

Within the framework of the Global Platform for the Prevention of Autoimmune Diabetes (GPPAD), the clinical primary prevention study POInT (Primary Oral Insulin Trial) is conducted multicentrically at seven clinical sites in five countries. POInT aims to prevent the formation of islet autoantibodies, and thus the induction of type 1 diabetes.

As a result of a misdirected immune reaction, the insulin-producing beta cells of the pancreas are destroyed in people with type 1 diabetes. It was previously thought that metabolic changes occur close to the onset of clinical disease and that the pancreatic beta cells are destroyed by the autoimmunity. However, no one had looked closely at what happens when the autoimmunity starts.

Therefore, the POInT study conducted a frequent follow-up in the first years of life—starting at four months of age—in over 1, hydrochlorothiazide triamterene 25 mg 000 children with a genetically determined 10 percent risk to develop type 1 diabetes. This enabled the researchers to precisely correlate changes in blood glucose with the timing of islet autoantibody development.

“Our results change our understanding of the development of type 1 diabetes. We show that metabolic changes occur in an earlier phase of the disease than previously anticipated,” explains Anette-Gabriele Ziegler, Director at the Helmholtz Munich Institute of Diabetes Research (IDF). Together with an international team of researchers, she conducted the POInT study. The team examined the pre- and post-prandial blood sugar levels together with islet autoantibodies in the participating children.

First, and in contrast to the previous assumption, the results showed that the blood sugar concentrations shortly after birth are not stable. Instead they decrease in the first year of life, and then increase again at around 1.5 years of age.

“The dynamic changes in glucose metabolism in the first years of life were a surprise to us. They very likely reflect changes in the pancreatic islets and signal that we need to study glucose metabolism and the pancreas in early life more intensely” says Katharina Warncke, Chief Physician for Pediatric Endocrinology / Diabetology at the Department of Pediatrics and scientist at the IDF.

Importantly, the scientists found that in the children who developed autoimmunity compared to children who did not, blood sugar levels after meals were already higher two months before the formation of islet antibodies. This difference persisted and was also followed by increases in pre-meal values after the autoimmunity.

Puzzle around the key event inducing the autoimmune reaction

The researchers were able to determine that blood sugar levels of infants and young children behave dynamically and reflect the concentration peak of islet autoantibodies—this indicates a phase of activity and susceptibility of islet cells.

“The change in post-meal blood sugar levels shortly before the initial detection of autoantibodies points to the likelihood that there is an event impairing the function of the islets preceding and contributing to the autoimmune reaction. As glucose values further increase after seroconversion, the impairment or damage seems to be sustained leading to further glucose instability,” explains Warncke.

“The observed changes in blood sugar levels in relation to autoantibody formation are exciting. Now we know that the start of the disease process is likely to be acting at the pancreatic islets and we can focus our research to find the cause of this chronic illness,” says Ezio Bonifacio, Professor at the Center for Regenerative Therapies Dresden at the Technische Universität Dresden.

In summary, the scientists discovered that metabolic alterations occur in a much earlier stage of the disease than previously assumed: changes can occur in parallel to autoimmunity or even precede it. The researchers suggest that the excess increase in blood sugar levels after eating and shortly before the formation of antibodies is connected to a change in islet cell function.