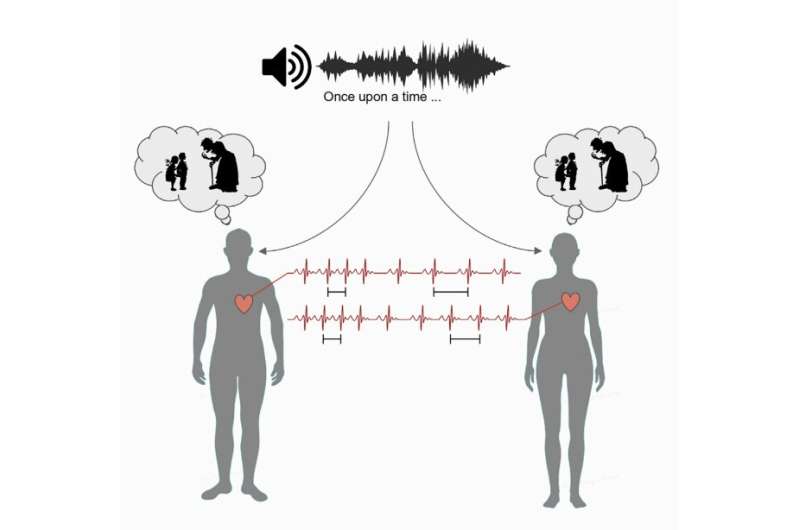 People often unconsciously synchronize bodily functions like heartbeat and breathing when they share an experience, such as a live performance or have a personal conversation. According to a new study, subjects’ heart rates synchronize even if they are just listening to a story by themselves, and this synchronization only occurs when the subjects are paying attention to the story. The findings from the research are reported September 14 in the journal Cell Reports.

“There’s a lot of literature demonstrating that people synchronize their physiology with each other. But the premise is that somehow you’re interacting and physically present the same place,” says co-senior author Lucas Parra, a professor at City College of New York. “What we have found is that the phenomenon is much broader, and that simply following a story and processing stimulus will cause similar fluctuations in people’s heart rates. It’s the cognitive function that drives your heart rate up or down.”

“What’s important is that the listener is paying attention to the actions in the story,” adds co-senior author Jacobo Sitt, seroquel overdose death a researcher at the Paris Brain Institute and Inserm. “It’s not about emotions, but about being engaged and attentive, and thinking about what will happen next. Your heart responds to those signals from the brain.”

The investigators conducted a series of four experiments to explore the role of consciousness and attention in synchronizing participants’ heart rates. In the first, healthy volunteers listened to an audiobook of Jules Verne’s 20,000 Leagues Under the Sea. As they listened, their heart rate changed based on what was happening in the story, as measured by electrocardiogram (EKG). The researchers found that the majority of subjects showed increases and decreases in their heart rate at the same points in the narrative.

In the second experiment, volunteers watched short instructional videos. Because the videos were educational with no underlying emotional variations, this experiment confirmed that emotional engagement in a story was not playing a part. The first time they watched the videos, heart rates across the subjects showed similar fluctuations. The participants then watched the videos a second time while counting backwards in their heads. That time, the lack of attention resulted in a drop in the synchronization of heart rates across subjects, confirming that attention was important.

In the third experiment, the subjects listened to short children’s stories, some while attentive and others while being distracted, and then were asked to recall facts from the stories. The researchers found that the fluctuations seen in the participants’ heart rates were predictive of how well they did at answering questions about the story—more synchronization predicted better test scores. This indicated that changes in heart rate were a signal of conscious processing of the narrative.

When the researchers looked at changes in breathing rates, they didn’t see the same synchronization among the subjects. This was surprising, since breathing is known to affect heart rate.

The fourth experiment was similar to the first, but it included both healthy volunteers and patients with disorders of consciousness—such as those in comas or persistent vegetative states. All subjects were presented with an audiobook of a children’s story. As expected, the patients had lower rates of heart synchronization than did healthy controls. When the patients were examined six months later, some of them with higher synchronization had regained some consciousness.

“This study is still very preliminary, but you can imagine this being an easy test that could be implemented to measure brain function,” Sitt says. “It doesn’t require a lot of equipment. It even could be performed in an ambulance on the way to the hospital.” He notes that much more validation is needed with larger numbers of patients as well as comparisons to accepted tests of brain function like EEGs and fMRIs. This is something his group is continuing to study.