It’s a stretch to say that turkey faces stiff competition from tofu, but when a major supermarket posts an online guide to festive vegan food, you know that Christmas menus are shifting – and as more people opt for plants over meat, some of us are left wondering how to feed the guest who’s no fan of ham or any other food sourced from animals.

“When meat eaters invite vegans over it’s often like ‘let’s just buy some vegan sausages’ – vegan food is an afterthought,” says Melbourne-based chef Tobie Puttock. “But if you make vegetables shine, you can make vegan food appealing to everyone.” 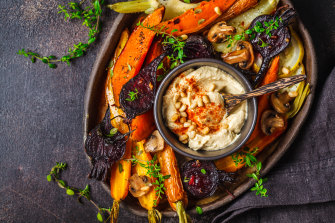 Make veggies shine by roasting and pairing with dips such as hommus or fresh pesto.Credit:iStock

Each Christmas he feeds a mixed bunch of eaters: his parents and in-laws who all eat meat and his partner and daughter who don’t – Puttock himself eats meat occasionally. Last year, alongside a roast side of salmon and a small turkey breast, advil and tylenol for toddler fever he served butternut pumpkins stuffed with walnuts, quinoa, cranberries and sage baked in the oven – a recipe from his book SuperNatural which shows how to create great dishes from plant food alone.

It was the main dish for the vegans, but the meat eaters loved it too, and it highlights some key points about pleasing plant eaters and meat eaters alike. One is that catering for vegans doesn’t have to involve pretend meat; the other is that it’s possible to create a great centrepiece dish without serving a cooked bird or a piece of meat – like Puttock’s roast cauliflower with Romesco sauce, Neil Perry’s vegan paella or Jill Dupleix’s warm roast veggie salad with lemony lentils.

Plant-based nibbles also need some thought. What works for someone who doesn’t eat cheese – especially when COVID makes it tricky to serve communal bowls of nuts? A Mediterranean-ish platter of ready-made falafel, stuffed vine leaves (canned are good) and marinated roast veg from the deli is an easy option, or you could serve crostini with a plant-based pesto. Louise Pfeiffer, Vice-President of the Animal Justice Party, makes this one with artichokes and walnuts and uses vegan fetta to make spinach and cheese triangles with filo pastry.

And barbecues? That’s where fake meat comes in for those who’d rather not eat the real thing. Plant-based meat can be hit and miss but some products are surprisingly meaty: among the better ones in my experience are Birds Eye’s Plant-Based Burgers, V2Food Plant-Based Sausages, or Quorn Sausages (these contain egg so are not vegan) although they often benefit from a topping of onions and/or mushrooms sautéed in olive oil.

It’s one thing for meat eaters to include plant-based dishes for vegan guests – but should dedicated plant eaters with strong views about animal welfare, for instance, be expected to provide turkey or ham for meat-eaters? A lot depends on the relationship between host and guests.

“I’m not a vegan but I cook vegan food at home and if we have friends over for dinner, they know there’s likely to be no meat,” Tobie Puttock says.

When she became a vegan 10 years ago Louise Pfeiffer made it clear she wanted no meat or poultry on the table when she hosted her first vegan Christmas dinner for her extended family.

“There was some resistance to begin with so I tried to shift the emphasis away from the food to Christmas being more about spending time together and putting peace on our plates,” she says. “But I’ve stuck with a vegan Christmas ever since and my family understands and is respectful.”

But this year it’s different – she’s busy preparing for the South Australian State Election in March in which she’ll run as lead candidate for the Animal Justice Party in the Legislative Council – and it’s her sister’s turn to cook for Christmas.

“There’ll be both meat and vegan food, and I’m bringing a chargrilled capsicum and eggplant terrine – I’m always happy to introduce people to good plant-based dishes.”

SuperNatural is published by Penguin, Rrp $39.99