A few summers ago, I caught a man taking a photograph of my self-harm scars on my left arm while he and I were alone in an elevator together. He didn't even bother to silence the camera sound on his phone. I slowly placed my right hand on my left shoulder and turned away, waiting for the elevator door to open. When it finally did, he got off the elevator and walked away. I pulled my scooter over against the wall in the corridor of the ninth street light rail station so I could sit and process what had just happened. I also texted a few friends to ask if they thought I was justified to feel the way I did or if I was overthinking it.

The overwhelming consensus was that I was right to feel violated, assaulted, purpose flomax objectified, and overall furious over this encounter. He'd violated my privacy in more ways than one. In that second, when I heard the shutter sound, it felt like he'd taken away my last little sliver of dignity. This was not the first time I felt as though someone had taken a part of me without my permission. I became a rape survivor at the age of 13 and then was in a few abusive relationships in high school and college; at a certain point it feels as though I gave up entirely on respecting my body or caring about what happened to it, or at whose hand. It just didn't feel like mine anymore. In high school, I would often wake up to find evidence of self-harm with little recollection of the act. This only contributed to the lack of control I felt over my body, and I ended up in a self-loathing, downward spiral.

Over the past 17 years, I've slowly developed a healthy amount of self-love and no longer knowingly put myself into potentially dangerous positions. I have not engaged in self-harmful behaviors in well over a decade, but the scars are with me for life. We all have our demons and everybody has scars on the inside, but having them on the outside can be another monster entirely. Mine remind me every single day of the hatred, frustration, secrecy, shame, and confusion I used to feel. 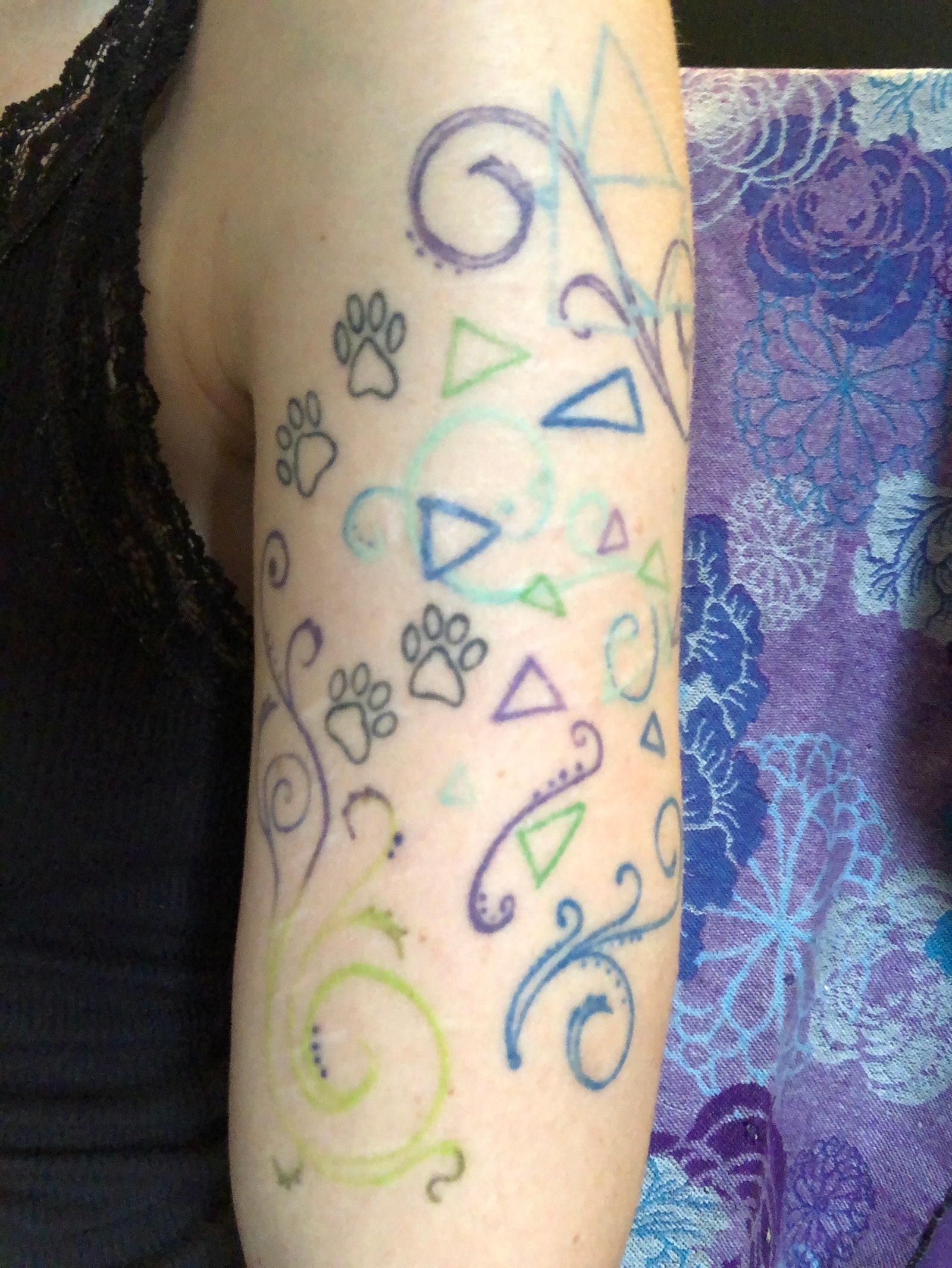 Sure, like everyone, a couple of the scars I have are from accidents; I have some from falling off bikes, and a few from dogs and cats. But I can't get away with telling people this is the case for all of them, as some of the scars on my body are unmistakably self-inflicted. This means that every single time I meet a new person while I am wearing a tank top, or when I wear one for the first time in front of someone I've known for a while, they are likely to know this about me immediately. There is a very specific set of facial expressions people make when they catch a glimpse of someone's self-harm scars for the first time. They cover a range of feelings, from "Awwww, poor girl, she must have been through a lot," to "Why doesn't she wear long sleeves?" to "Why would she do that to herself?" to finally "What's wrong with her?" before people finally work to neutralize their expressions and pretend they didn't see anything in the first place. But they can't unlearn what they now know, and I can't untell them what I had never intended on sharing to begin with.

There comes a point at which you realize you no longer want to be constantly confronted by your past. When I made the decision to tattoo over my scars, what was most important to me was that I would no longer elicit these negative thoughts, images, or feelings in anybody who sees my bare arms. Even if they were to get a closer look and catch a glimpse of the scars underneath my body art, the scars would not be the first thing they’d see, and therefore the horror and shock of the scars (and the truth behind them) would not be the first things they'd feel.

Just a few days ago, I showed a friend of mine my new tattoo, and her response was simply, "Oh, fun!" That is the reaction I’m looking for: my tattoos are colorful, fun, swirly, simple, and for the most part, utterly meaningless. Go ahead and ask me what they mean. After all that I've been through — and the journey I’ve been through to heal from it — getting these tattoos to cover my scars reminds me that I have every right to do whatever I want with my body, and my tattoos are my choice.

I don't have to be reminded of every detail of my sexual assault, my eating disorder, my drug addiction, or any other aspects of my mental illness every time I look down, because I am in recovery and am fortunate to have stretches of weeks without even having a single intrusive thought. Covering my scars with tattoos was something I've wanted to do for a long time but always considered it a pipedream. That is, until I was photographed without permission.

The tattoos haven't erased all my negative interactions, of course. Even those I've sought help from — including tattoo artists — have sometimes been less understanding than I would have liked. The first tattoo artist I saw for a consultation told me in front of other clients and artists in the studio that a friend of hers had scars that would "put mine to shame," which made me feel invalidated, as though mine weren't "bad enough" to cover. In the end, I went with another tattoo artist for my first tattoo, because I didn’t want to get tattooed by someone who had made me feel that way.

Despite these increasingly rarer situations, my scars are hidden by "fun" doodles, an act that feels like it has restored a bit of dignity. Some of my tattoos were done as walk-ins, which means I got them fairly spontaneously and that not much time or thought went into the design. People make such a big deal about tattoos because they're permanent; for years, I looked at tattoos of all types and did research on the exact style of tattoos I was interested in because it felt like it was supposed to be this huge decision. But after I was photographed, I decided anything would be better than having my old life and old pain on display. All I knew when I stepped foot into that first tattoo shop for my initial consultation was that I wanted my scars gone. And now they kind of are.

If you or someone you know is considering self-harmful behavior, you can contact the Crisis Text Line by texting "HOME" to 741-741. For a list of ways to cope with self-harm urges, click here.