Home » MLB » Where the College Football Playoff stands after Week 11

You'd struggle to find another November weekend with as little impact on the College Football Playoff.

With several games featuring many of the best teams in the Bowl Subdivision canceled due to COVID-19 safety guidelines and protocols, the playoff race pressed pause.

For those teams able to move forward as scheduled, the weekend presented an opportunity. Notre Dame beat Boston College 45-31, showing little signs of a post-Clemson hangover to remain unbeaten. Florida scored 63 points on Arkansas, while quarterback Kyle Trask made another Heisman Trophy statement.

But there are no changes to the top four: Alabama leads, followed the Irish, Ohio State and Clemson. 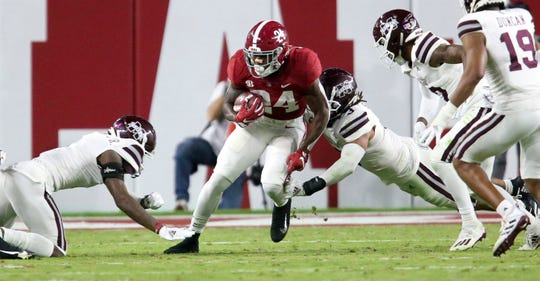 The playoff debate will be rekindled this week, should college football be able to withstand the latest round of coronavirus-caused cancellations and postponements.

That so many schedules have been impacted brings up a question for the playoff selection committee: How will the group compare teams playing different numbers of games across different Power Five conferences?

TOP 25: Alabama still No. 1 in Amway Coaches Poll ahead of Notre Dame

MISERY INDEX: Virginia Tech has become the team that can’t close the deal

HIGHS AND LOWS: College football winners and losers from Week 11

Here’s how the top four would look today, followed by the four teams just on the outside:

2. Notre Dame: Ian Book has turned a corner in his last four games, with eight touchdowns without an interception and 18 completions of 20 or more yards. His play has jump-started the Irish offense to balance their strong defense.

3. Ohio State: The Buckeyes haven't lost to Indiana since 1988, dodging a few close calls along the way — including a 52-49 win in 2012 and comebacks from small second-half deficits three times in the past six meetings.

4. Clemson: A struggling running game looks forward to Saturday's meeting with erstwhile rival Florida State, which ranks last in the ACC in yards allowed per carry (5.18) and rushing touchdowns (22).

5. Texas A&M: Owners of a four-game winning streak, A&M hasn't won five consecutive games in a single season since early in 2016 and hasn't won five in a row during conference play since 2010, when the Aggies were in the Big 12.

6. Florida: With 28 touchdowns in six games, Trask is ahead of the pace set by last year's Heisman winner, Joe Burrow, and would almost certainly threaten Burrow's 60 touchdown throws had the Gators been able to play a full season.