Those are two jaw-dropping bookends for Fuller, who was a largely unknown Vanderbilt women's soccer player less than two months ago.

"I faced a lot of challenges as a goalkeeper on the Vanderbilt University women's soccer team and as a kicker on the football team," Fuller said during “Celebrating America,” hosted by Tom Hanks and featuring appearances by President Joe Biden, Harris, celebrity performers and Americans who have made a difference during the pandemic. "But seeing other women break barriers and be the best at what they do gave me the strength to succeed.

"And that's why it is such an honor to introduce a true groundbreaker — and after 232 years of waiting — being able to say these words: Our nation's first woman vice president, Vice President Kamala Harris."

During the inauguration event, Fuller was featured alongside Bruce Springsteen, Justin Timberlake, Kareem Abdul-Jabbar, Kim Ng and many others.

So why did Fuller get the honor of introducing the new vice president? She made history as the first woman to play in a Power Five college football game.

Fuller was not in attendance at the “Celebrating America” event. But her Vanderbilt football highlights were featured, and she delivered a short, pre-recorded message via video to introduce Harris.

Harris is not only the first woman to be vice president, but also the first Black American and first South Asian American to hold the office.

About three weeks after election day, Fuller made her debut as a college football player Nov. 28. She filled in as Vanderbilt’s kicker when COVID-19 sidelined numerous players. Fuller played two games and made two extra-point kicks, becoming the first woman to score in a Power Five college football game.

On Dec. 20, Biden’s presidential inaugural committee contacted Vanderbilt to gauge Fuller’s interest in being highlighted as part of Inauguration Day events. And, on Jan. 5, Fuller officially accepted the invitation. 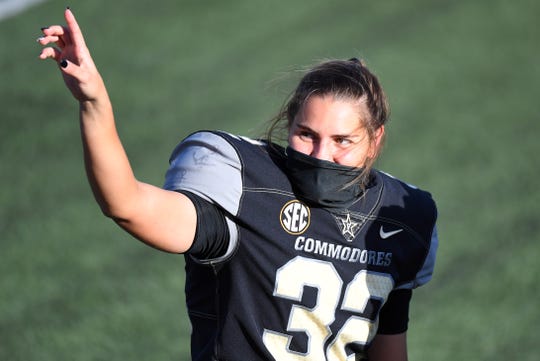