Home » MLB » Opinion: NFL, NFLPA showed in 2020 they can work well together, and a strong relationship is good for both

TAMPA, Fla. — It was a strange but fitting moment that represented so much more than a photo op.

Roger Goodell and DeMaurice Smith. De-Smith and Roger. Together.

The NFL commissioner and the executive director of the NFL Players Association shared a makeshift stage Thursday at an outdoor plaza at Amalie Arena, mucking it up like old chums. Goodell was at the tail end of a pandemic-influenced, scaled-back version of his annual state of the league address when Smith popped up from backstage — like a surprise guest joining the headliner at a concert for a duet.

Their news conferences are usually scheduled on different days during Super Bowl week, but Thursday, they were back-to-back before a small in-person contingent of about 20 reporters and more connected via video conference. The leaders, who have often sparred from opposite corners in hashing out labor matters, hung out for a few minutes as the NFL Network’s Steve Wyche moderated what felt like an NFL version of peace talks. 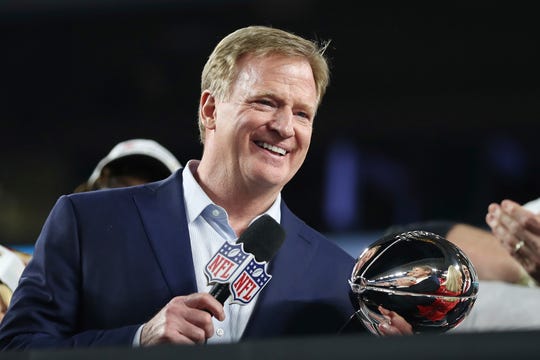 As he grabbed a mic that was adorned with the league’s logo, Smith joked, “Holding the shield. Exploding in my hand.”

It may have been the first time in the Super Bowl’s 55-year history that the commissioner and labor union leader saw fit to schedule such an event together, which was apropos considering all that occurred to get to the end of a unique season during a pandemic. Without the collaboration of the league and the players union to an unprecedented degree, there would not have been a season.

That’s why the photo op moment this week was worth much more than the proverbial thousand words.

The union and the league, on the heels of hammering out a 10-year extension of the collective bargaining agreement in March, worked through the COVID-19 landscape to establish the protocols and policies that resulted in a football season amid widespread doubts — and fears — that they could pull it off. Sure, both sides were motivated by their respective financial interests in a business that generated more than $14 billion during the 2019 season. And months after extending the CBA, they struck another labor deal in July — a CBA within a CBA — to address the conditions needed to carry on during the pandemic.

Yet to even get to that point, the reality check that both sides confronted together on the front end and throughout the season was all about science, health and safety.

All told, the collaborative effort between the NFL and the union — including key roles played by in-house medical experts, the NFL’s Allen Sills and the NFLPA’s Thom Mayer — may have never been stronger.

Those nice words from Smith, echoed by Goodell and expressed similarly by officials on both sides at various points of the season, have more substance when you consider the history of the acrimonious labor wars. Think lockout and lawsuits. Mistrust and nasty rhetoric. Body blows, with the gloves off.

Back when all hell broke loose

When Goodell and Smith assumed their respective posts in succeeding Paul Tagliabue and Gene Upshaw, respectively, they were seemingly pitted as bitter rivals right from the start as the league’s long run of labor peace fizzled after owners in 2008 decided to opt out of the previous CBA after the 2010 season. In other words, all hell broke loose with Goodell and Smith leading the charge.

“We’ve had our dust-ups in the past,” Smith said. “Just a few. But this season, it really took all of us to get through this.”

Yeah, it was striking to hear Smith’s choice of words as he talked of being “proud” of the partnership the NFLPA has with the league. That hasn’t always been the case as players felt anything but true partners with NFL owners.

“We have a fantastic game, a great business, that we are only able to do together,” Smith said. “I think the best days in the NFL are ahead of us."

Goodell: “Like any relationship, it evolves. I have to go back, 11 years ago we were in a battle to get a new collective bargaining agreement. We worked our way through that; we signed a 10-year agreement and then a 10-year extension. That may be the only time in the history of the NFL that we had that kind of relationship. And that comes with growing pains, it comes with many challenges. But … we have worked together to find solutions and worked past our differences.”

For example, to get the 2020 season on track, the sides had to agree on the scope of COVID-19 testing essential to establishing protocols to identify infected individuals and contain the potential of outbreaks. The union pushed for daily testing throughout the season after the league originally wanted the testing based on the positivity rate. Also, with on-field work during the offseason wiped out by the pandemic, another issue was resolved when the league agreed to an acclimation period of roughly two weeks at the start of training camp that gradually ramped up to the start of padded practices.

“One of the things we learned was that the input we had with one another last year — what I call the ‘mini-CBA’ last summer — helped us,” Goodell said. “We both found different solutions. Together, we were better for that, ultimately.”

Moving forward, that synergy between the sides will be further tested. As always. The sides will have to agree on the salary cap for 2021, after the “mini-CBA” agreement involved spreading the revenue lost during 2020 over multiple years in determining the cap, which is based on revenues. The sides agreed to a cap of at least $175 million for 2021, down from the $198.2 million cap this season — yet far less of a drop that would have occurred without a revision in the formula used to devise the cap.

Goodell said it’s possible that the 2021 cap will exceed $175 million. The figure is critical for not only determining how much money teams will have to spend when free agency begins on March 17, but also as a factor that may dictate jobs lost or salaries cut in cap-slashing moves.

Then there’s the 17-game season. In the CBA extension struck last year, NFL owners gained the long-desired OK to institute a 17-game season. Players have long balked at extending the season. But it’s been agreed on now and is in the owners’ hands. The extended schedule is undoubtedly another chip for the next round of contracts with TV networks that loom. And it will help recoup some of the financial losses from 2020.

Goodell, though, held off on declaring that the 17-game season is a definite for 2021 … although it is expected to be. He indicated that further talks with the NFLPA are needed before that 17-game schedule comes to fruition.

“There’s still more work to be done on that,” he said. “Once the (Super Bowl) is done, we’ll turn our focus a little bit more to that. Even though we have that option, we’re going to continue to talk.”

They can also talk about how to structure the NFL’s offseason. NFLPA president JC Tretter, the Cleveland Browns president, has suggested scrapping the organized team workouts and minicamps that have been part of the NFL’s calendar but were scrapped in 2020 due to the pandemic. Most teams replaced the on-field work with virtual classroom sessions. Tretter has maintained that the quality of the game in 2020 — scoring reached an all-time high again, penalties were down — proved that the extensive offseason programs are not needed.

As Smith put it, “It’s all about being smarter.”

It make sense, especially for veteran players, to lessen the physical work during the offseason, given the grueling sport that football is. Goodell, though, didn’t seem particularly warm to that idea.

Yet surely, as this past season has shown, there’s a foundation in place to accomplish much with a spirit of collaboration.