Home » MLB power rankings: Dodgers remain at No. 1 despite losing series to Padres

Round 2 of the heated Padres-Dodgers series goes to San Diego.

The Padres won three of four games — including the epic 11-inning comeback Sunday night — against their rival in Los Angeles, but the Dodgers remain at No. 1 in USA TODAY Sports' weekly MLB Power Rankings.

The Padres and Dodgers have already met seven times this season and it's only April, with San Diego leading the head-to-head matchup 4-3. The Dodgers won the first series 2-games-to-1.

Meanwhile, the the San Francisco Giants and Seattle Mariners were the biggest movers in the rankings, each moving up nine spots. 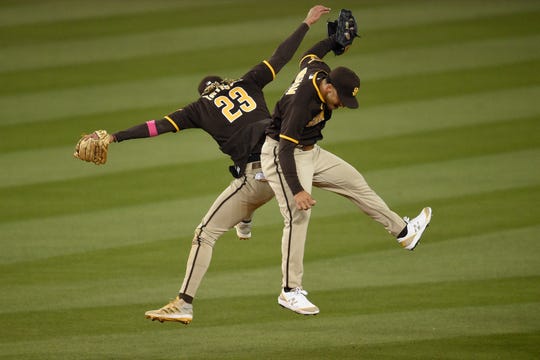 The Dodgers were left stunned after blowing a 7-1 lead in the seventh inning to the Padres on Sunday.

Fernando Tatis Jr.: Two homers off Clayton Kershaw, two off Trevor Bauer, one off Dustin May.

Their 13-game winning streak — third-longest since moving to Oakland in 1968 — snapped by Orioles on Sunday .

Early returns have Boston fans feeling like the October baseball a possibility.

Michael Kopech stellar out of the bullpen — will he force his way into rotation?

The Rays have allowed 107 runs, third-most in baseball.

Bryce Harper has reached base safely in 20 of his last 29 plate appearances over his past six games.

Pitchers have combined for an AL-best 3.04 ERA this season.

Started the week in first place in the NL Central, ended in last place after seven-game losing streak.

Gerrit Cole's 50 strikeouts in his first five starts are the most for any pitcher in New York's storied history.

Shane Bieber's 57 K's through the first five starts of the season are the second-most in MLB history behind Nolan Ryan, who struck out 59 in 1978.

Max Scherzer could be a possible trade candidate.

Set to host a seven-game homestand against the Angels and Red Sox.

Richard Rodriguez continues to shine out of the bullpen and has not allowed an earned run in nine appearances.

Charlie Blackmon has a career batting average of .302 but is hitting just .153 this season.

Tigers last in the league with a -37 run differential.