The Los Angeles Dodgers ended their 32-year dry spell without a World Series championship Tuesday night — and the Dodgers' faithful can finally celebrate after winning eight consecutive NL West titles, yet falling short in the Fall Classic in back-to-back seasons (2017 and 2018).

The Dodgers' title drought wasn't as long as the team that won the World Series a year ago (the Washington Nationals had never won in the franchise's 51-year history, which included its time as the Montreal Expos) … or the team that prevailed in 2016 (the Chicago Cubs' previous championship came 108 years earlier, in 1908). However, it does get them off the list of MLB teams with the most frustrated fan bases.

A BLACK EYE: Season of sacrifice for MLB ends with galling breach of protocol

Here then, is our ranking of the clubs best poised to end their own lengthy stints without winning a World Series.

The Padres made the playoffs in 2020 for the first time in 14 years, but the nucleus of their 37-23 team looks poised to help them contend for several years to come. SS Fernando Tatis Jr. is already a superstar and his double-play partner, 2B Jake Cronenworth, has a good chance at winning NL Rookie of the Year honors. From established stars Manny Machado and Eric Hosmer to one of MLB's top farm systems, the future is bright.

On the pitching side, the midseason acquisition of Mike Clevinger gives them a legitimate ace to go along with Dinelson Lamet and Chris Paddack, with top prospects MacKenzie Gore, Luis Patiño, Ryan Weathers and Adrian Morejon waiting in the wings.

Prediction: Next title in 2022 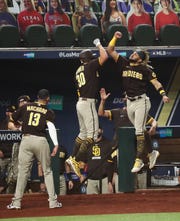 Perhaps the most disappointing fact for Mariners fans is that they had ace Felix Hernandez for 15 seasons and never once made the playoffs. Current GM Jerry DiPoto is known for his unending appetite for making trades (and never really making much progress), but it does look like there's a pretty solid foundation at long last.

Of their key players, only 3B Kyle Seager is over 30. Young infielders J.P. Crawford and Evan White are AL Gold Glove finalists. CF Kyle Lewis is the favorite for AL Rookie of the Year. And in the minors, the M's have two of the game's top-five overall prospects in OFs Julio Rodriguez, 19, and Jarred Kelenic, 21 — who should both be ready to contribute next season. Pitching, however, remains an issue.

Prediction: Next title in 2027

The Indians came oh-so-close to winning it all in 2016, needing only a victory in Game 6 or 7 at home to close out the Cubs. With a young core and outstanding pitching, it looked like they'd be back fairly soon. Even though top starters Corey Kluber, Trevor Bauer and Clevinger are no longer in Cleveland, Shane Bieber has emerged as the team's ace of the future.

The big question for the Indians is what happens to All-Star shortstop Francisco Lindor, who becomes a free agent after the 2021 season. Will they trade him and start rebuilding? Or will they make one last push for a championship?

Prediction: Next title in 2030

The Mets are seemingly close to getting a new ownership group in place. That change could make a greater impact than anything they might be able to do on the field for the next few years.

1B Pete Alonso, OF Michael Conforto and SS Amed Rosario are solid building blocks, but the Mets may have missed the window to challenge for a title while Jacob deGrom and Noah Syndergaard are at the height of their powers. The farm system doesn't look like it's going to be much help for a while.

Prediction: Next title in 2035

The Tigers had quite a run under manager Jim Leyland, especially from 2011-13 when they reached the ALCS all three years and won it once. But a lack of reliable relief pitching always seemed to be the Achilles heel that kept the Tigers from winning it all.

Former AL MVP Miguel Cabrera powered the Tigers offense during those good times, but he's now a shell of his former self as the team has begun rebuilding. Cabrera is still under contract through at least 2023 — so it might take a while to get everything back on track. When they do, it will likely be on the strength of a talented core of young starting pitchers: Casey Mize, Matt Manning, Tarik Skubal and Beau Burrows.

Prediction: Next title in 2037

The Brewers have made the postseason for three consecutive years, a first in franchise history. But a closer look at where they've finished in the NL Central during those years — first, second, fourth — reveals a disturbing trend.

They broke the bank for MVP Christian Yelich, signing him through 2028, so the challenge will be finding ways to build around him. We've already seen how difficult that's been for the Los Angeles Angels and their superstar, Mike Trout. 2B Keston Hiura and RPs Josh Hader and Devin Williams have yet to turn 27, but Milwaukee will need a greater infusion of young talent to get Yelich that title.

Prediction: Next title in 2039

The Rangers lost back-to-back World Series in 2010-11 and haven't won a playoff series since. In 2020, they moved into a brand-new stadium and finished with the worst record in the American League.

The old open-air Globe Life Park was hitter-friendly. The new retractable-roof Globe Life Field seemed to favor the pitchers. There's a metaphor in there somewhere. Until the Rangers figure out their identity, they're likely stuck in the middle.

Prediction: Next title in 2045

No team's fanbase has been tortured more than the Pirates'. And it's not even close. There was a brief blip of contention from 2013-15 when they made the postseason (however briefly), but for the most part it's been continuous suffering ever since young Barry Bonds left town in 1992.

The Tyler Glasnow/Austin Meadows-for-Chris Archer trade sent the franchise into a downward spiral and will continue to haunt the Pirates for years. Maybe decades. There's no loaded farm system like the Padres and Mariners have. There's no former MVP to build around. There's no new ownership group waiting in the wings. But at least there's a gorgeous ballpark.

Prediction: Next title in 2060