With every strikeout, the Citi Field crowd — now at increased capacity — roared. And when deGrom smoked a two-run single to help his own cause and chase his counterpart, Blake Snell, the ballpark erupted.

And then, that excitement turned to fear, worry and concern.

DeGrom departed the game after six innings because of right flexor tendinitis, the Mets said.

After deGrom finished the sixth inning, he entered the dugout and talked with head athletic trainer Brian Chicklo. Minutes later, Luis Guillorme went in the on-deck circle to hit for deGrom. 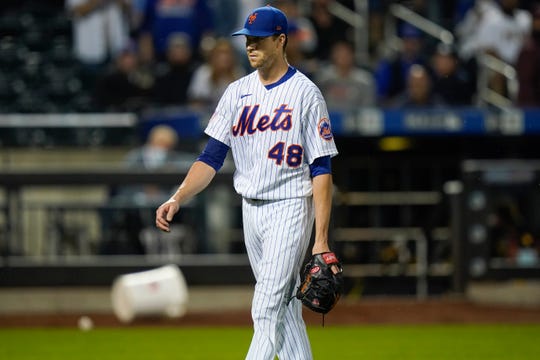 This seemed like a cause for concern because deGrom had one-hit the Padres to that point. He had struck out 10 while walking none. The Padres looked helpless against him.

In the top of the seventh, Miguel Castro took over for deGrom.

DeGrom on Friday lowered his season ERA to 0.56. According to MLB, it is the lowest ERA through 10 starts of a season since earned runs became an official stat in 1913.

Thanks to his two-run single in the fifth, deGrom now has more RBI at the plate (five) than earned runs allowed on the mound (four).