Home » MLB » Gambling on the future: Everything you need to know about the NFL Draft in Las Vegas

The NFL Draft starts on Friday morning (AEST) and, for once, what happens in Vegas won’t stay in Vegas.

Why Vegas? Well, after 50 consecutive years of staging it in New York, NFL team owners decided to take this money-making show on the road. Chicago, Philadelphia, Dallas, Nashville and Cleveland have each hosted the event since 2015. Now for the daddy of them all when it comes to letting your hair down.

The home stadium of the Las Vegas Raiders will be packed with fans, with Nevada media reporting the draft will attract a record turnout for a single event in the city in terms of the number of visitors and the amount of money they’ll spend in the hotels, casinos and other entertainment venues.

Just what should we be looking out for?

The Boar Hunter who could replace Davante Adams

As well as establishing himself as a solid first-round pick during his time at the University of Arkansas, Treylon Burks’ back-story became the stuff of legend. 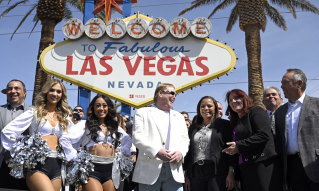 He spent parts of his youth hunting, and killing, wild boars with nothing more than a knife to finish the job. He would use dogs to sniff them out before tackling them and finishing the job with a knife strike to the heart.

Back to football, though, and Burks has the measurables teams hope will result in him becoming their next star wide receiver. He’s fast, he has huge hands, boasts a proven playing record and he certainly isn’t scared. Of anything.

Reports vary as to when a young man who has been likened to 49ers ace Deebo Samuel will be drafted. 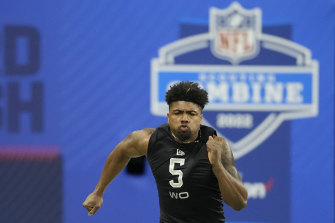 NFL hopeful Treylon Burks in action during the pre-draft Combine.Credit:AP

There is some buzz the Green Bay Packers are very interested in him with pick 22.

After losing star wideout Davante Adams to the huge deal offered by the Raiders in the off-season, Burks might be the man they want to take over as Aaron Rodgers’ go-to man.

If Adams and Tyreek Hill weren’t the two most dangerous wide receivers last season, they were both in the top five. Less than three months after the Rams won the Super Bowl, both men have been rewarded with massive contracts – but for different teams.

Hill has gone to the Miami Dolphins on a US$120m ($167m) deal and Adams to the Raiders on a five-year, US$141m contract. That’s a lot of cabbage. It’s also why their old teams decided that despite their terrific production it wasn’t worth keeping them.

With the number of great young wide receivers coming into the league each year teams are weighing up the following dilemma: If I can get 70 per cent of the production someone like Davante Adams would give me for 25 per cent of the cost, why not do it?

In a salary-capped league, such a move makes plenty of sense – on the proviso the untested players turn into reliable contributors.

If the cards fall the Packers’ way, and they can get the abovementioned Burks at pick 22, it will cost them just over $15m for his initial rookie deal.

That’s more than $100m less than what Adams could earn from the Raiders for the same period of time. That then allows teams to use their salary cap to upgrade other positions.

Franchise-changing wide receivers are out there every year. In the last five years, we’ve seen Cooper Kupp, Samuel, Justin Jefferson and Ja’marr Chase enter the league.

Among the wide receivers to watch in this year’s draft are Jameson Williams, Drake London, Garrett Wilson, Chris Olave and Burks.

Take the best available player? Nab the best player in the possible you most need help? Take a flyer on a quarterback knowing that if you hit paydirt your team can be turned around overnight? These are just some of the questions.

Here’s a rudimentary explanation of how the draft works and why players are selected where they are.

Round 1: Predominantly consists of players who are already the total package. They have all the physical attributes required to master their position and also a great baseline of technical proficiency.

Rounds 2 and 3: Players with either superb technical skills and passable athletic requirements or vice versa. Many a star still comes from these rounds.

Rounds 4 -7: There is always gold lurking, but it isn’t easy to find. A lot of these players will be lucky to make 53-man rosters for week one of the season.

But who knows, maybe there might just be a repat of that fella from Michigan who was drafted as pick No.199 of the 2000 draft.

Malik Willis is looming as the first quarterback to go in this draft. It isn’t a great year for quarterbacks, but many expect the Pittsburgh Steelers to grab Willis. They have the 20th pick at the moment but could trade their way up if they think their target will get picked before that. They need to replace the retired Ben Roethlisberger. Kenny Pickett and Sam Howell should also have no problem finding a team inside the opening few rounds of this draft.

Defensive players and offensive linemen are all the rage. Michigan edge rusher Aidan Hutchinson was looking every bit the top pick a couple of weeks back but Georgia’s Travon Walker now looks the favourite.

Six times in the last seven years a quarterback has gone with the first pick. Joe Burrow took his side to the Super Bowl in his second season while Kyler Murray has also made a great start to his career. Things have not panned out well for Baker Mayfield, Jameis Winston and Jared Goff. Last year’s top pick – Trevor Lawrence – is deserving of more time before judgment is cast.

Few draft fans will ever forget the circumstances surrounding Laremy Tunsil’s slide down the draft in 2016.

Tunsil was a chance of a top-five pick that year before a video on him smoking a bong through a gas mask on what should have been the biggest day of his life appeared. Nonetheless, he went at No.13 and is still going strong in the league, having twice made the Pro Bowl.

Tunsil announced on Thursday that he would be turning the infamous video into a NFT with the proceeds being donated to charity.

To see the drama on the stage, in each team’s war room, in the crowd and on the streets of Sin City, tune into ESPN from 10am on Friday.