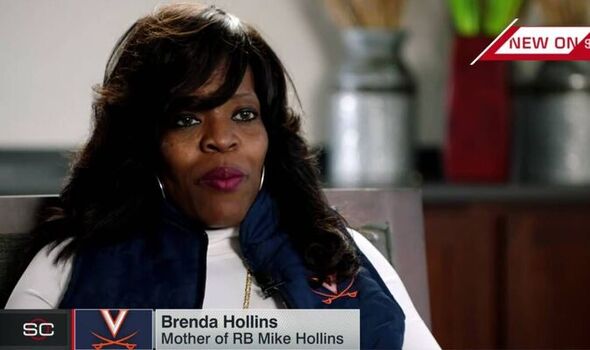 The mother of a college football star shot after a school trip has spoken of the horror she suffered in telling him his friends had not survived. Three Virginia Cavaliers football players — D’Sean Perry, Lavel Davis Jr. and Devin Chandler — were killed during the shooting on campus on Sunday night.

Perry, 22, was a junior linebacker and defensive end for the Cavaliers, and played in Virginia’s 37-7 loss to the Pittsburgh Panthers on Saturday. Davis was a junior receiver at Virginia, last playing for the team in late October, while Chandler, a junior, played as a wide receiver and kick returner.

Running back Mike Hollins, along with another student at the University of Virginia, survived the incident, and had to be told what had happened by his mother after waking up from surgery. Hollins’ mother Brenda spoke of the difficulty in revealing to her son that several of his friends and teammates had not survived.

Asked when she told him when his teammates had passed, she said: “We told him, right after they removed the ventilator, he was waiting and he asked the question.

“I hadn’t heard him talk so it was just a blessing to hear his voice, and as soon as we walked in, that was his first question, ‘where is D’Sean?’

“Then the room when silent so he knew. Then my daughter, he looked at her and she shook her head and said, ‘he’s gone’.

“Mike’s cry was so deep, like a cry that I never heard in my life that came from his soul. ‘Mum, I don’t know how I’m going to live without him,’ “he said. But I told him, you’ve got to live for him.

“His classmates are grateful for him because they said that he saved their lives. He was the first off the bus and told two of his classmates to run.

“Then he said he went back to do something because nobody was coming off the bus. He was going to beat on the windows.

“He said all he can remember was he turned but saw the shooter with the gun and then felt his back hot. Then he ran and pulled his shirt up as he ran and he saw the bullet protruding from his stomach.

“So he kept running but got afraid that if he ran too far, into the parking lot, nobody would find him and he would die. So he turned around and saw one of his classmates who helped him.”

A suspect, Christopher Darnell Jones, a former football player at the university, is in police custody.