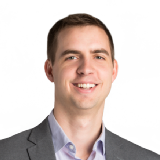 What began as an unpredictable mess of a college football season has swiftly turned into a predictable three-horse race among Clemson, Alabama and Ohio State. So much so that the Allstate Playoff Predictor gives the collective 124 other schools playing this fall only a combined 20% chance of winning the national championship.

While it currently seems that the playoff race has been one of the few chalk aspects of our lives this year, there is still plenty of time left for 2020 to rear its head and shake up the season. In fact, there is a 54% chance that at least one school among Alabama, Clemson and Ohio State will not make the playoff.

We simulated this season 20,000 times each day. The Allstate Playoff Predictor then simulated what the committee might do in each scenario. Just how wild might things get? Here are some of the results: 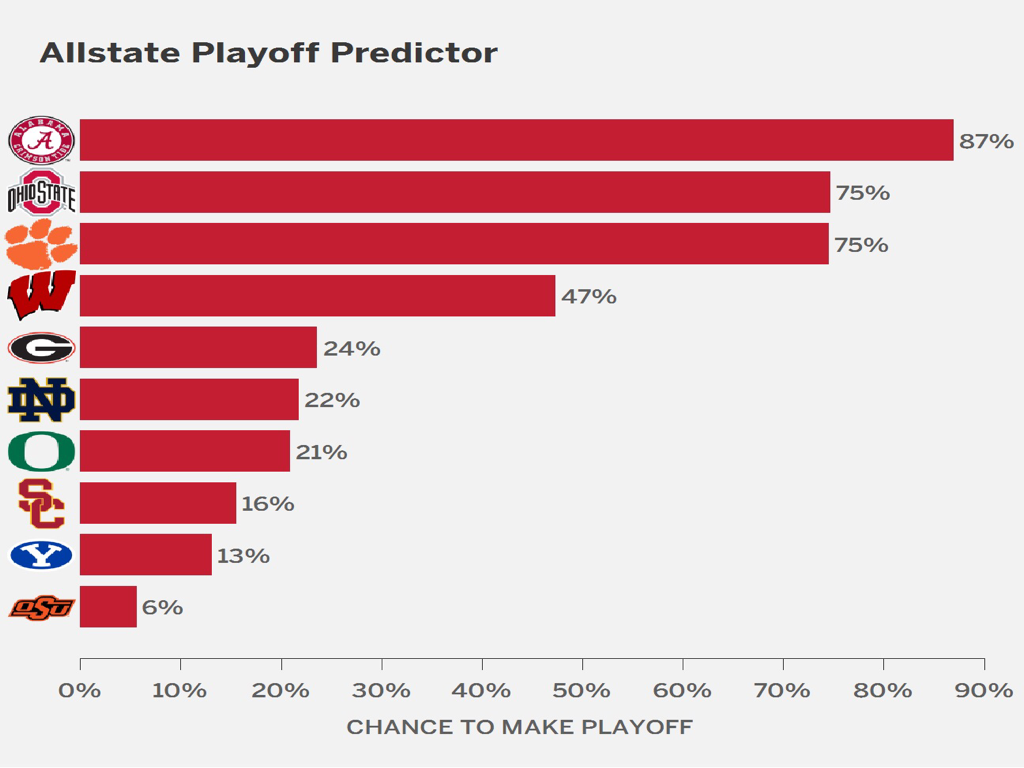 Headline: Heisman winner Mac Jones outshines Justin Fields in the title game, as all four Heisman finalists make it to the playoff for the second consecutive year. After Clemson withstood Trevor Lawrence’s absence in the fall, a returned Lawrence caps his brilliant collegiate career with another great performance, but ultimately the wear and tear of Clemson playing three more games is the difference against Ohio State.

How we got here: Alabama runs the table and hands Georgia its second loss, again in convincing fashion. In the ACC championship, Clemson comes from behind to beat Notre Dame by 10. It is Notre Dame’s third loss, after losing to Clemson and North Carolina in the regular season. The committee selects Alabama and Clemson as the No. 1 and No. 2 seeds before members even walk into the decision room.

In the Big Ten, Indiana pulls off another miraculous upset on Nov. 21 and beats Ohio State. The Buckeyes still make it to the Big Ten championship, where they easily beat a Purdue team that is limping to a West division title after losing to Rutgers and Nebraska in consecutive weeks.

Spencer Rattler is able to will Oklahoma back into the top 10 after it wins out and beats Iowa State for the Big 12 title, but the two early-season losses haunt the Sooners.

Out west, Stanford beats a one-loss Arizona State in the Pac-12 championship to finish 7-0. Its season-opening win at Oregon diminishes as the rest of the Pac-12 North beats up on one another.

In this simulation, there is no clear-cut No. 4 team. Stanford is an undefeated Power 5 champion but played only seven games and did not look impressive in several close wins. BYU is 10-0, having beaten both 8-1 MWC champion Boise State and 8-1 MWC runner-up San Diego State. Cincinnati wins the AAC, but a loss to Houston leaves it on the outside.

Strength of record (SOR) would suggest Georgia has the best résumé of potential No. 4 teams in this situation, but the committee’s aversion to losses leaves Stanford as the favorite to get the No. 4 seed. In perhaps the biggest upset in the committee’s history, BYU gets the selection before losing by three touchdowns to Alabama 45-24.

Headline: In a rematch of the first College Football Playoff National Championship, Oregon defeats Ohio State for its first title and the Pac-12’s first since 2004.

How we got here: Oregon and Ohio State were not even planning to play this fall, yet each runs the table to reach the title game. Alabama also wins each of its games, and the committee has an easy job seeding these teams. In both average opponent difficulty and number of games played, Alabama has the hardest schedule, followed by Ohio State and Oregon.

As in most situations, it is deciding between two or three options for the fourth spot that is the most difficult thing for the committee. Every other team in the country has at least two losses. It is hard to justify any team with two losses as the second team from a conference in the playoff, so the committee debates between Clemson and Notre Dame.

Notre Dame defeats Clemson in their first matchup but loses to Boston College the next week. Clemson loses its second game against Virginia Tech but avenges its loss to Notre Dame in the ACC championship. Both teams have two losses and are 1-1 against each other, but there is only one spot left in the playoff. The committee has to choose between a conference championship and strength of schedule as a tiebreaker. In this simulation, the committee rewards Notre Dame for beating South Florida, an AAC school, 52-0 in its only nonconference game, whereas Clemson beat FCS Citadel 49-0.

Headline: Georgia validates the committee’s controversial decision by winning the championship as the first two-loss team to make the College Football Playoff, after going 2-1 against Alabama on the season. Trevor Lawrence goes to a third straight national championship game but comes away empty-handed for the second year in a row.

How we got here: Alabama becomes the first team to be No. 1 in the final rankings without winning its conference championship. In a wild year, no team is undefeated and only two Power 5 champions have one loss: Clemson and Oklahoma State.

Clemson looks ahead to its rematch with Notre Dame and loses its first regular-season game in over two years in a snowy December finale in Blacksburg.

Wisconsin overcomes its COVID-19 disruption and soundly beats each regular-season opponent, at times with a depleted roster, to face Ohio State in the Big Ten championship game. A close loss to a very talented two-loss Ohio State team knocks Wisconsin no further than the No. 3 seed.

The case for Georgia is that despite dropping a close game at Kentucky, the Bulldogs beat No. 1 Alabama by two touchdowns in a rematch and win the SEC in the process. Oklahoma State, on the other hand, has only one loss — to Oklahoma in a blowout. Despite the Cowboys having the third-best strength of record in the country at 10-1 and a conference championship, the committee cites a down year for the Big 12 and an ambiguous reference to the “eye test” as the reasons for selecting Georgia. Will any of these exact situations happen? Probably not, but each is certainly possible.