The San Francisco 49ers are poised to select their quarterback of the future after acquiring the third pick in the upcoming NFL draft in a blockbuster trade Friday with the Miami Dolphins.

How did that news go over with the 49ers’ current starting quarterback, Jimmy Garoppolo?

“I’m sure Jimmy was a little pissed off from it, just like I would be, too," 49ers coach Kyle Shanahan said Monday during a Zoom news conference. “But me knowing Jimmy, he’ll be fired up and come in and work his butt off. Knowing Jimmy, the more mad Jimmy gets, usually the better he gets. So, if Jimmy gets madder and stays healthy, this is going to be a good thing for Jimmy, too, which could be a great problem.”

Shanahan and 49ers general manager John Lynch spoke during a half-hour media session on Monday in their first public comments since the trade that allows them to move up from the 12th slot in the first round — at the premium price of sending first-round picks in 2022 and 2023, plus a third-round pick in 2022, to Miami.

With Clemson’s Trevor Lawrence pegged to go No. 1 overall to the Jacksonville Jaguars, the 49ers will be positioned to draft one of the other highly rated throwers in a quarterback-heavy draft: BYU’s Zach Wilson, Ohio State’s Justin Fields, North Dakota State’s Trey Lance or Alabama’s Mac Jones.

“Ultimately, the decision we made, we were very comfortable with the players at the top of this draft,” Lynch said. “We felt like putting ourselves in position at three, where we kind of control things, was something very attractive to us.”

NFL MOCK DRAFT: What will 49ers do with No. 3 overall pick? 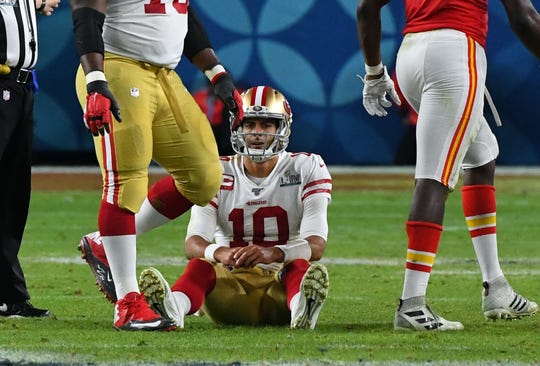 The trade underscored the uncertainty that exists with Garoppolo’s durability. Although Garoppolo, 29, led the 49ers to a Super Bowl during the 2019 campaign, he suffered season-ending injuries in two of the past three seasons. He started just six games last season, finished by an ankle injury. In 2018, he played just three games before suffering a torn anterior cruciate ligament. He’s missed more games (25) than he has played (23) the past three seasons. That’s a bit of a reality check as it concerns the 49ers' long-term prospects at the position and what options the team had to address the issue in the upcoming draft.

“It was a stated goal: We needed to come out with the quarterback position stronger this year,” Lynch said. “We’ve put ourselves in a position to make that happen with this move."

The 49ers, who finished 6-10 and in last place in the NFC West in 2020, have invested so much in Garoppolo. After acquiring him from the New England Patriots in 2017, they signed the quarterback to a five-year, $137.5 million contract extension in February 2019. Now he’s pretty much the lame-duck quarterback, although Lynch and Shanahan insist they expect Garoppolo will lead the team while a young franchise passer waits in the wings.

“We also didn’t want to say goodbye to Jimmy,” Lynch said. "We’ve shown we can get to a Super Bowl with Jimmy. We can play at a high level. And we don’t think those two things are mutually exclusive, the opportunity to trade up and get a guy who can be a big part of our future and keep Jimmy, who we’re very high on.”

That was an essential part of the message that Shanahan and Lynch delivered to Garoppolo. The coach spoke to Garoppolo first, before the news of the trade was announced, and described it as a “good” conversation.

“Obviously, no one wants to hear that,” Shanahan said. “He wasn’t excited about it, as you’d expect. Jimmy handled it great, as he always does. We were straight-up with each other. I told him how we felt. This doesn’t change his circumstances right now. He’s still coming in here, trying to lead this time….We still plan on him leading us and getting us as far as we can go with him.”

Of course, as the trade amplifies, plans can change.

Would the 49ers trade Garoppolo if they receive an offer that blows them away?

“That’s accurate with every player on our team. I mean, probably including myself," Shanahan said. "If someone blows us away with a trade for me, I bet you John would trade me. I mean, definitely.”