Tiger Woods, Rory McIlroy and Jack Nicklaus lead a star-studded line-up at the famous Champions’ Dinner ahead of The Open at St Andrews… but LIV Golf chief Greg Norman is absent after his snub by the R&A while Phil Mickelson skips it

The great and good of golf turned out for the stylish Champions’ Dinner ahead of The Open on Tuesday night – minus the notable absences of LIV chief Greg Norman and Phil Mickelson, the controversial breakaway tour’s marquee player.

Norman, the chief executive of the LIV Golf series that has caused a huge divide within the sport in recent weeks, was brutally snubbed by the R&A for their celebrations at the 150th Open this week.

The organisers had concerns that the Aussie’s presence as the face of the Saudi-backed tour – which is spending vast amounts of money to lure top golfers away from both the PGA and DP World Tours – would hijack the event.

As a two-time winner of the Claret Jug, Norman was an obvious invite under normal circumstances for the four-hole Celebration of Champions event on Monday and to join the likes of Tiger Woods, Jack Nicklaus and Rory McIlroy at the ultra elite Champions’ Dinner of past Open winners on Tuesday.

However, the R&A, in an unprecedented snub, announced that his absence was down to the fact that he hadn’t been invited.

Norman hit back and slammed the decision to leave him out as ‘very petty’ and said it was a ‘dumb’ to exclude him from events at St Andrews. 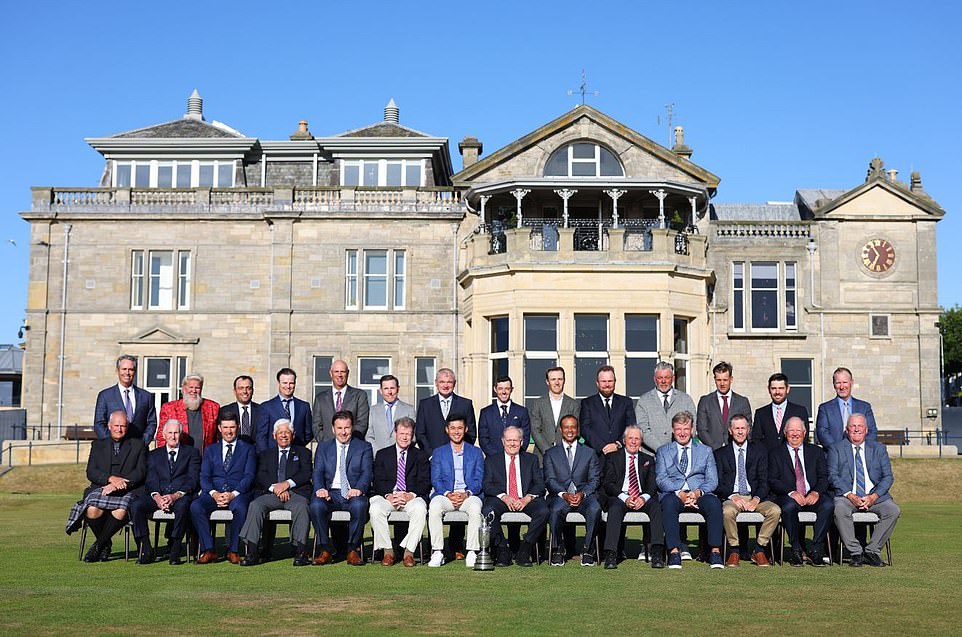 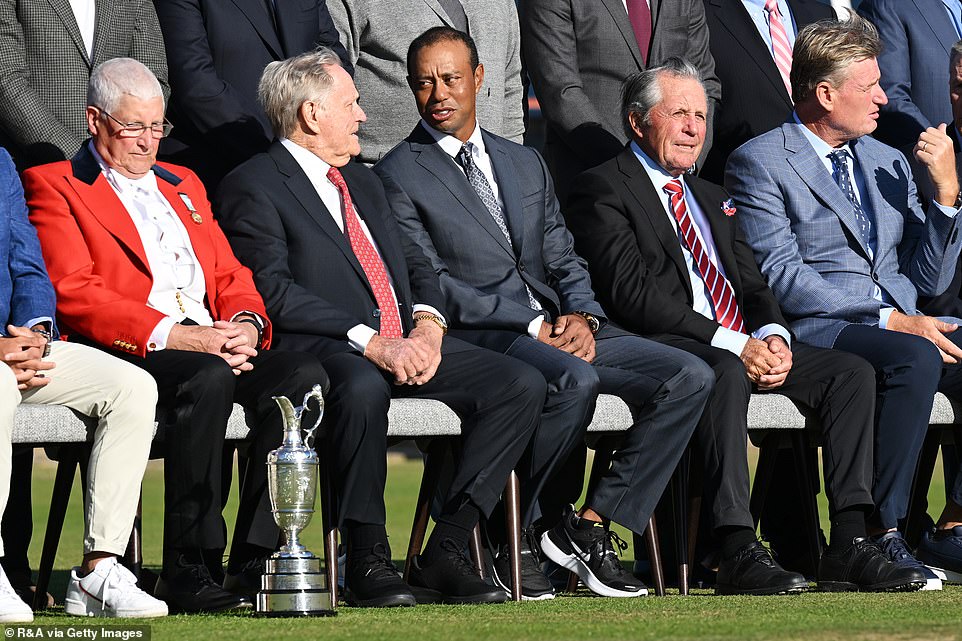 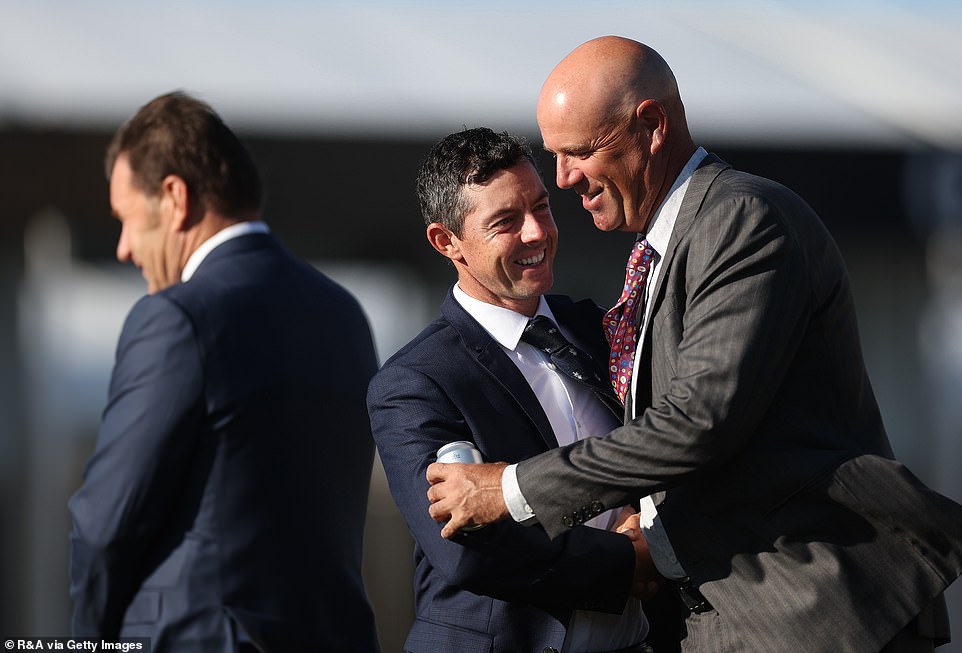 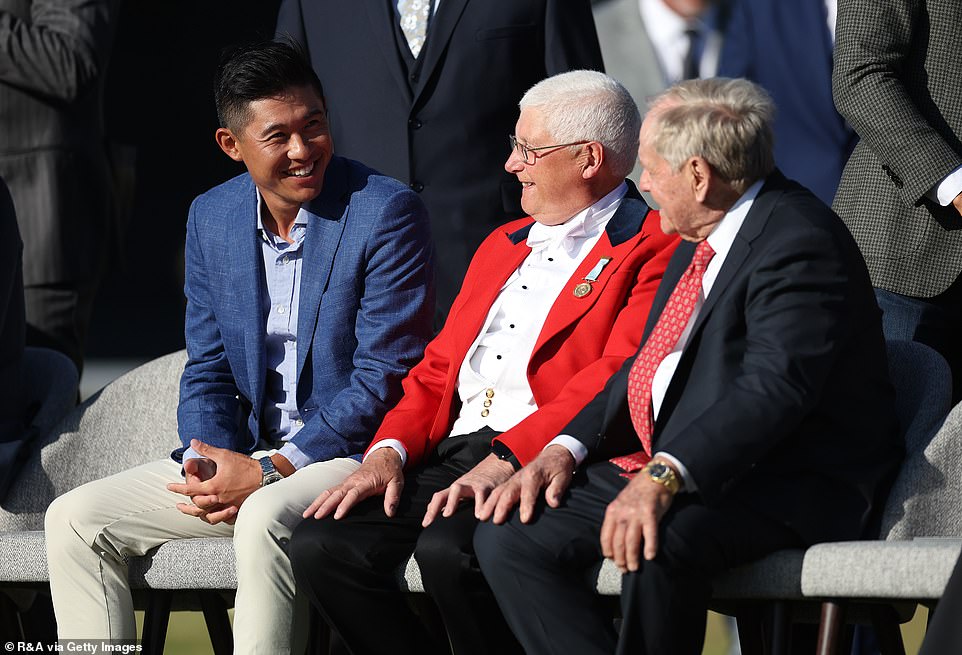 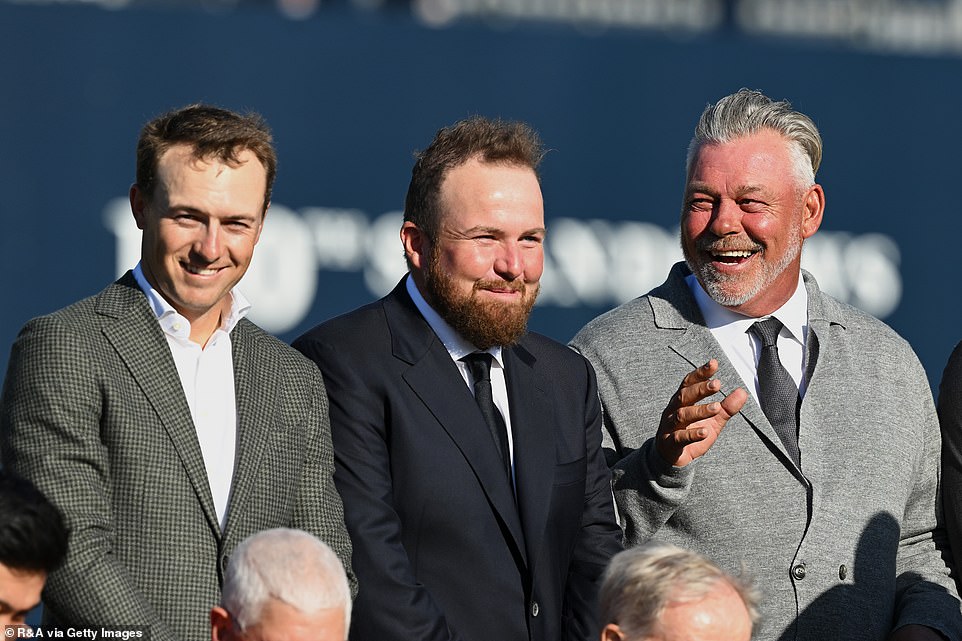 L-R: Jordan Spieth, Shane Lowry and Darren Clarke share a joke as the former champions catch up before their famous dinner

Mickelson, meanwhile, is in the field in Scotland this week but reportedly told the R&A that he didn’t want to attend either the Celebration of Champions or the Champions’ Dinner.

Both Norman and Mickelson would have been in for a frosty reception around the dinner table if they had been in attendance anyway.

McIlroy and Woods have both been notable critics of LIV Golf and were in attendance as former champions.

The group of legendary golfers posed for a picture in front of the R&A’s iconic clubhouse that overlooks both the 1st tee and 18th green at St Andrews’ Old Course – widely known as the ‘home of golf’.

Front and centre of the picture was Woods, who on Tuesday fiercely reiterated his opposition to the Saudi-backed breakaway fronted by Norman and questioned whether its younger recruits will ever be able to compete in major championships such as the Open. 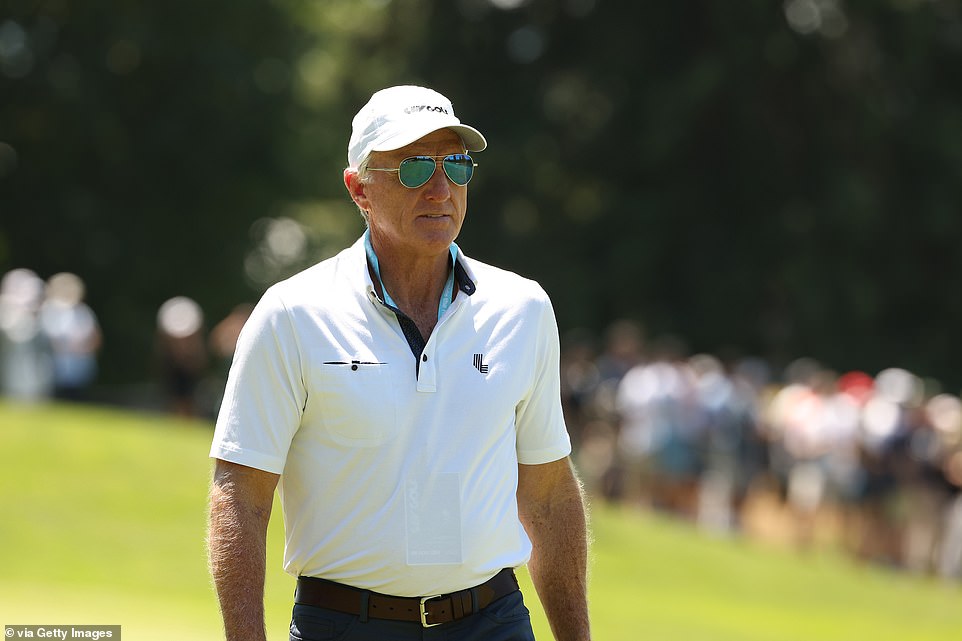 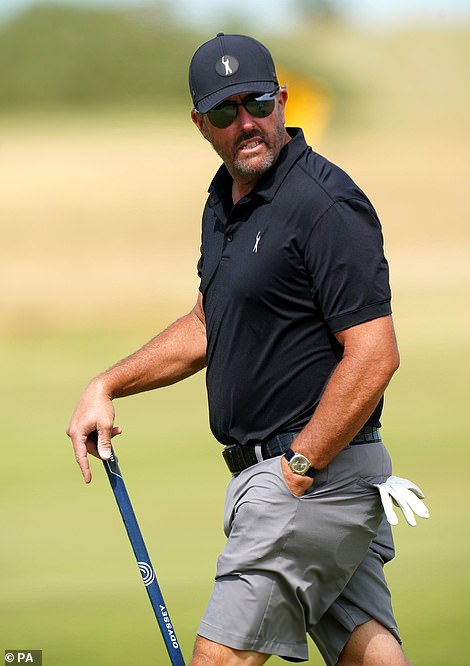 Phil Mickelson reportedly told organisers that he didn’t want to attend the dinner, despite being in Scotland this week

The 15-time major winner said he supported the R&A’s decision not to invite Norman and questioned why the likes of Mickelson, Dustin Johnson and Brooks Koepka had ‘turned their backs’ on the PGA Tour to join LIV Golf’s series of 48-man, 54-hole events.

‘I disagree with those who have gone to LIV, I think they have turned their back on what allowed them to get to this position,’ he began.

‘Some players have never had a chance to even experience playing on one of the tours.

‘They have gone right from the amateur ranks to that organisation and never really had a chance to feel what it is like to play a schedule or play in big events.

‘Some of these players may never even get a chance to play in major championships. That is a possibility. They will never get a chance to experience this right here. Walk down the fairways at Augusta National.

‘You are just getting paid a lot of money up front and playing a few events and playing 54 holes.

‘They are playing blaring music. I can understand 54 holes for the Senior Tour. The guys are older and a little more banged up. When you are young, 72-hole tests are part of it. We used to have 36-hole play-offs for majors.

‘I just don’t see how this is positive in the long term. It would be sad to see some of these young kids never get a chance to walk these hallowed grounds and play in these majors.’ 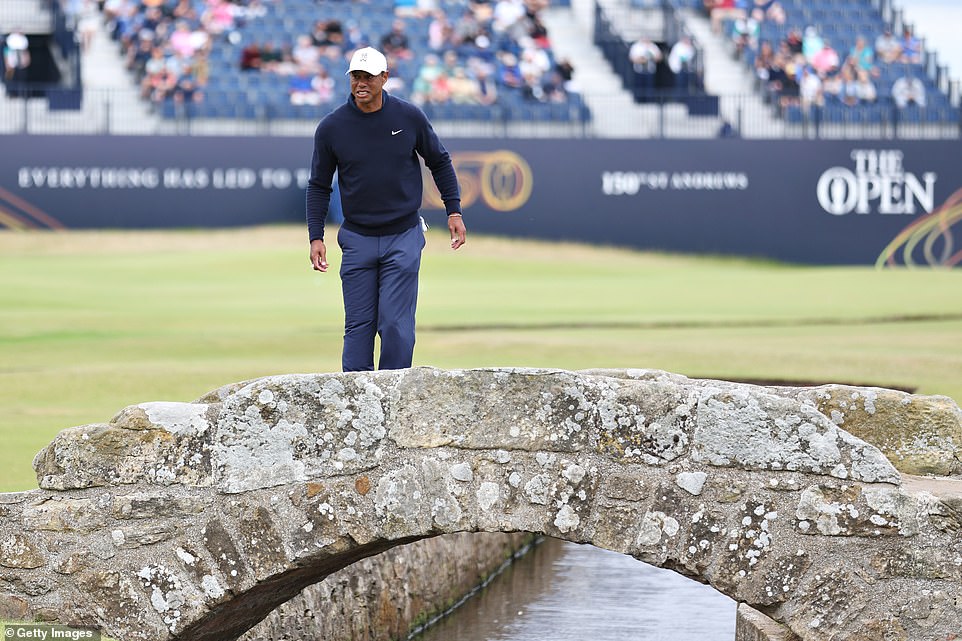 Tiger Woods, stood on the iconic 18th bridge at St Andrews, brutally shot down the golfers who have defected to LIV recently

Speaking specifically about Norman, Woods added: ‘I know what the PGA Tour stands for, what it has given us: the ability to chase after our careers, the trophies we play for and to earn what we get and the history that has been part of this game.

‘I know Greg tried to do what he is doing now back in the early Nineties. It didn’t work then and he is trying to make it work now. I still don’t see how that is in the game’s best interests.

‘All the governing bodies, the PGA Tour, the European Tour, all the majors — we all see it differently to Greg.’

Those in attendance at the Champions’ Dinner who are playing this week will undoubtedly have had their minds on the challenge at hand as they try and add another Claret Jug to their collection.

Mickelson drew one of the earliest tee times in the first round – 7:30am local time – and will play with Lucas Herbert of Australia and Kurt Kitayama.