Tiger Woods opens up about struggles since car crash

Tiger Woods has been spotted sneaking in some extra links practice alongside Rory McIlroy ahead of next week’s Open Championship. Woods makes a fairytale return to St Andrews – where he has won two of his three Claret Jugs – for the 150th edition of the famous tournament.

The American was back out competing at the JP McManus Pro-Am in Ireland earlier this week, in order to get in some ideal links course preparation ahead of the upcoming major. Woods came away from the two-day event on seven-under-par for the tournament, leaving him in a tie for 39th.

Following his two-day outing the 15-time major champion has been back out on the course after being spotted at Ballybunion Golf Club in Ireland, as he continues his links practice. Woods had a special guest alongside him too, as fellow star McIlroy also joined him out on the Irish setup.

This is not the first time the famous pair have shared some Open preparation, as Woods and McIlroy shared a session out on the range at the Pro-Am on Monday. Ahead of his return to St Andrews, the American is sporting a new driver in his bag, as he hunts down what would undoubtedly be the biggest victory of his uber successful career.

JUST IN: Rory McIlroy opens up on locker room anger at Saudi LIV stars and tells them to not return 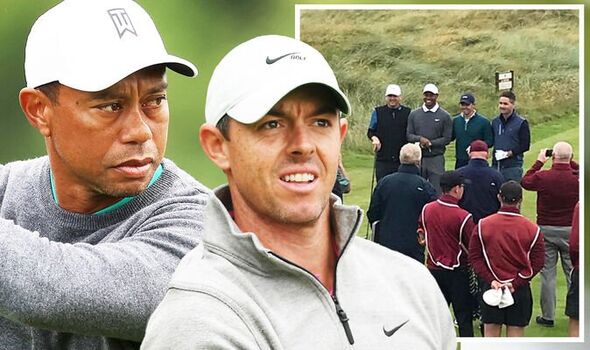 Keen to check out his fellow pro’s new piece of kit, McIlroy had a hit of Woods’ new driver as the pair conversed on the range. As the 33-year-old stood over the ball, the 82-time PGA Tour winner asked: “Too much loft for you?” To which McIlroy responded: “A little, yeah.”

Woods’ outing on the famous Old Course in a week’s time will be his first competitive outing since the PGA Championship in May. The American made his long-awaited return to the PGA Tour in April after teeing it up at this year’s Masters at Augusta, 14 months after suffering severe injuries in a high-speed car crash.

Just a few weeks later the American was back out competing again, as he played in the second major of the year at Southern Hills. Things at the PGA Championship did not go to plan though, as Woods was forced to withdraw from the event after round three after the effects of his car car injuries began to take their toll.

With fears surrounding his participation at St Andrews, the 46-year-old took the tough decision to pull out of last month’s US Open, in order to ensure he was fit and ready to battle it out for a third Claret Jug in Scotland next week.