Golfing legend Tiger Woods made a trip to tennis great Rafael Nadal’s academy in Majorca, as the American continues to build his fitness following his troubles at The Open Championship. The 15-time major champion made a return to his ‘favourite golf course in the world’ at St Andrews this month.

Whilst things did not go to plan for Woods on the course – as he missed the cut after shooting nine-over for the tournament – it was no doubt a special week for the 15-time major winner, who returned to the place in which he won two of his three Claret Jugs. Despite missing the cut, Woods was given a hero’s reception on the 18th hole on Friday, as the golfing great appeared to shed a tear as he headed down the famous fairway.

Many tipped that his rousing reception in Scotland could well be the perfect swansong for the 82-time PGA Tour winner, as he continues to recover from injuries sustained in a car accident in February 2021. However, if Woods’ recent appearance in Majorca is anything to go by, retirement is not on the cards.

It seems the 46-year-old is continuing to build his fitness up after playing golf out in Spain over the past week whilst holidaying in Majorca. As part of his trip on the Spanish island, Woods stopped off at the Rafa Nadal academy, who like the golf icon, is battling fitness issues to prolong his hugely successful career. 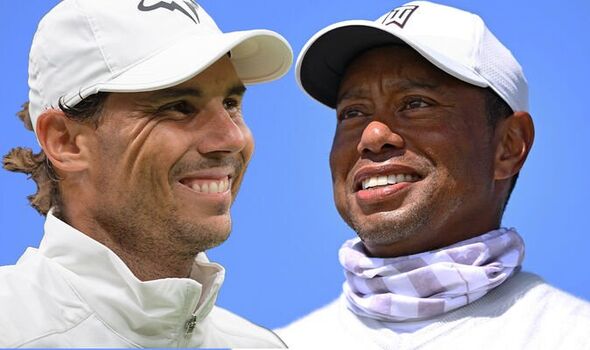 Following his disappointment at St Andrews, Woods himself dismissed the idea that he is ready to call time on his career, but did insist he may never play an Open at the Old Course again. The American has played three times this campaign at The Masters, PGA Championship (where he was forced to withdraw) and of course earlier this month at The Open.

Speaking about his second round and the future, the 46-year-old said post-round in Scotland: “I had a few tears. I’m not one who gets very teary-eyed very often about anything. But the warmth and the ovation at 18 – it got to me. To me it felt like this might have been my last Open here at St Andrews.

“I’m not retiring from the game but I don’t know if I will be physically able to play back here again when it comes back around. I’ll be able to play future Opens, yes, but eight years’ time, I doubt if I’ll be competitive at this level.”

Throughout his comeback, Woods has reiterated that he would only be playing professional golf on a part-time basis due to the effects of his injuries. With the PGA Tour campaign nearing its conclusion, the American is expected to play at the PNC Championship alongside son Charlie, and the Hero World Challenge later this year.