These days Rory McIlroy tends to start tournaments more like a family diesel than the Ferrari of old.

So the avoidance of calamity in a very respectable first round would have been perceived as a decent outcome by the legions of fans who turned out to cheer him around the undulating acres of Sandwich.

The late bonus of a birdie on the 18th saw him finish on level par and with a spring in his step. Out in the least hospitable part of the day and faltering on the front nine — accompanied by two players who do not like each other — this was highly satisfactory with the promise of better to come. 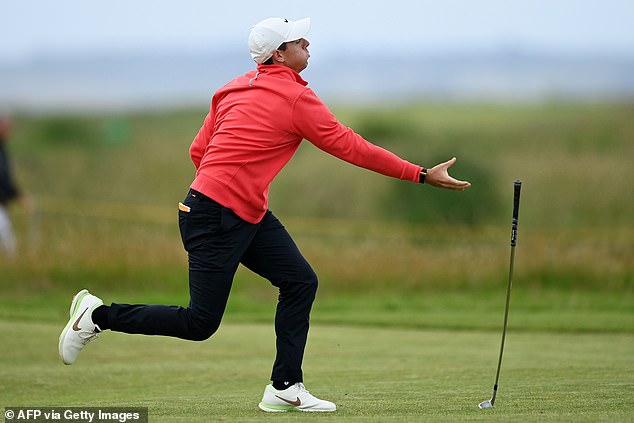 ‘I played the last 11 holes in two under par which I thought was a really good effort in those conditions,’ said McIlroy. ‘Mentally, it feels better to birdie the last and get back out there tomorrow.

‘I didn’t expect the wind, and anything around even par was pretty good. I said to Harry (Diamond, his caddie) walking to the eighth, “Let’s just try and get back to even par”. That was the goal for the last few holes.

‘After that wobble on the front nine, I set myself the target and I was able to achieve that which feels good. I’ll sleep better tonight and feel better about myself.’

With Tiger Woods indisposed, McIlroy is the nearest thing this Open has to a rockstar, albeit one whose recent material has failed to live up to the magic of their earlier offerings. 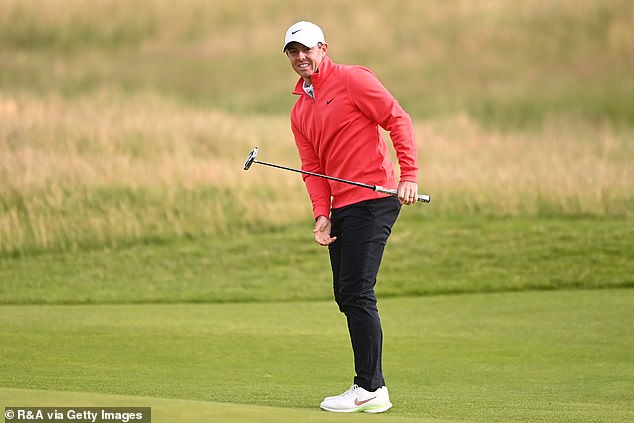 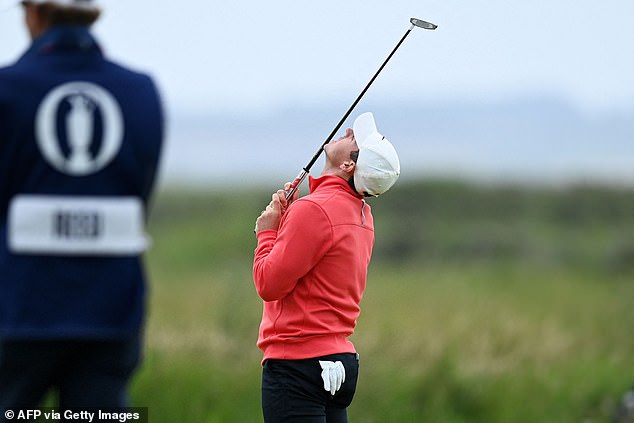 And the 32-year-old shot a nervy first nine holes at Sandwich, Kent on day one of The Open

Those who acclaimed him on the first tee are starting to require long memories as 25 majors and seven years have passed since his last significant triumph, but they will have had grounds here for optimism.

McIlroy has won his next tournament three times immediately after missing the cut in his previous nine events. That happened at this month’s Scottish Open, and the way he played the first hole suggested he might be up to something again.

The contrast with his display at Portrush two years ago could hardly have been greater. Finding the burden of playing on home soil too much there, he quadruple-bogeyed the opener to set the tone for two days that saw him packing up on the Friday night, despite a second-round surge. That day he dragged his opening drive into the crowd, breaking someone’s mobile in the process, as he kicked off with an eight.

This time he found the right of the fairway, played a beautifully measured wedge into the heart of the green and slotted home from close range to loud approval. 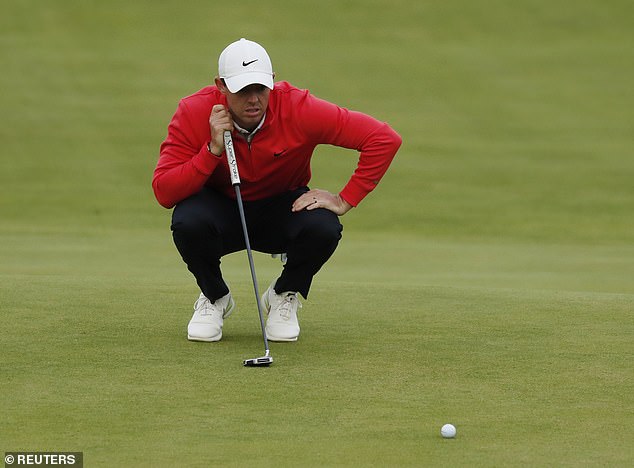 However, McIlroy gathered himself and finished the day level par in a strong turnaround

‘No out of bounds on the first hole here, which was nice,’ he smiled. ‘One of the things I’ve struggled with in the last couple of weeks was the driver, so that was the perfect start. I drove the ball far better today.’

It was a similar story on the second, except the putt gave a foreboding of what was soon to follow — missing from four feet to stall what would have been an electrifying start.

His playing partners, Patrick Reed and Cameron Smith, were struggling to hold on to par, scrambling to keep up.

It looked a bit mischievous putting them together — the marmite American and genial Aussie, whose dishevelled locks hint that barber shops are still closed for lockdown. The two have history from the 2019 Presidents Cup in Melbourne, where they deliberately bumped shoulders during a four-ball, Smith having made caustic comments about his opponent’s integrity. 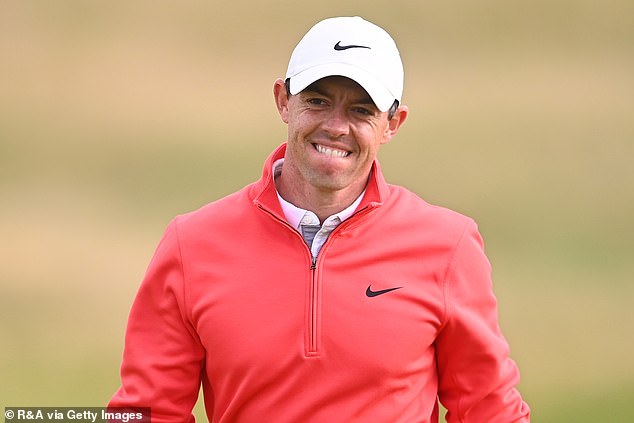 There appeared a certain froideur among the grouping, probably unhelpful to the sociable McIlroy, who on Wednesday had wisecracked his way through his final preparatory round with Darren Clarke.

It was not long before he was giving the hole a familiar accusatory stare. The distant white horses in the channel showed the increasing gusts, and the Ulsterman became unsaddled by three straight bogeys.

On the fifth and sixth holes he failed to make his par from putts within six feet, and on the long seventh — trying to rescue himself from the rough into the teeth of the wind — he could not get down in two after spraying his third shot right.

But there was to be no unravelling after that, and he looked pleased to have steered clear of both triumph and disaster.