Home » Golf » Smith, Mickelson miss the cut at US Open

Cameron Smith has missed the cut as Marc Leishman hung tough to stay in touch during another rough and tumble round at the US Open in Massachusetts.

Smith’s hopes of challenging for a first major championship bit the dust at Brookline after a second disappointing round with Australia’s world No.6 following up an opening 72 with a frustrating 74.

Smith slumped to six-over par for the tournament, missing the halfway cut by a distance on Friday night (Saturday AEST).

Leishman birdied his penultimate hole in a 71 that left the 38-year-old at one over and six shots behind halfway leaders Collin Morikawa and fellow American Joel Dahmen.

Playing in his 84th consecutive major, Scott is one stroke further back after a three-over 73.

Little-known compatriot Todd Sinnott is also two over on his major debut. A sectional qualifier in Japan, the 439th-ranked Sinnott posted his second successive 71 to impressively survive the cut. 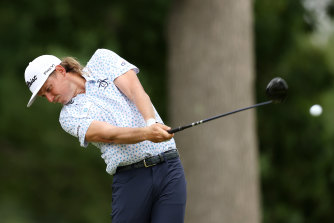 Cameron Smith has missed the cut at the US Open.Credit:Getty Images

Two weeks after his sister Minjee Lee won her second major at the US Women’s Open, Min Woo Lee also secured a weekend tee time after a late rescue act in his second round.

Lee eagled his penultimate hole, the eighth, sinking from 5.5 metres to ensure he battled back to three over and right on the cut line after a level-par round of 70.

But the tournament is over for Smith and fellow Australians Lucas Herbert and Jed Morgan. Smith had his work cut out after a difficult opening round and his hopes of a fast start were quickly scuppered on Saturday.

The Queenslander found the thick, rough stuff in front of the green at the par-three second, and swished angrily at the grass after failing to get within nine metres with his second shot. 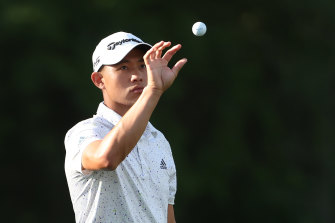 After a bogey there, his mood hardly improved with further dropped shots at the fourth and sixth, leaving him with a mountain to make it to the weekend. But it only got worse, a wayward drive at the 10th and the failure to extricate himself from a tough greenside lie at the 15th leading to two more bogeys.

A tee shot to five foot at the par-three 16th eventually earned Smith his first birdie in 23 holes, but it was too little to late.

Herbert crashed to 13 over with a horror 79, while Morgan ended at 16 over after following up his disastrous opening 82 with a 74.

Six-time US Open runner-up Phil Mickelson, who has become the face of the Saudi-backed LIV series, missed the cut after an 11 over total that was better than only two other competitors from the breakaway circuit.

Chasing the third leg of a career grand slam, Morikawa grabbed a share of the lead at five under with a 66, the low round of the day.

Dahmen fired a 68 as the leaders claimed a one-stroke advantage over five players, including pre-tournament favourite Rory McIlroy (69) and defending champion John Rahm (67).

World No.1 Scottie Scheffler (67) was three under and two off the pace.