Rory McIlroy broke a fan’s hand at The Open on Thursday following a wayward tee shot. And following the incident, pictures of the fan wearing a sling emerged. The golfer was in fine form during the first day of action at St Andrews and finished the day in second place after a round of 66.

McIlroy had been widely tipped to win The Open before it got underway amid a run of strong form. And his first round score shows he should be in the mix for honours come Sunday. But his first day back on the St Andrews course was full of drama after he left Charlie Kane with a fractured hand.

Kane, who works in the social media team at the PGA Tour but was on the east coast of Scotland as a spectator, took to Twitter in the aftermath of the incident to publish an update of what happened. He posted three pictures of his hand, which was severely bruised and swollen, and a fourth picture which showed him sporting a sling once his injury had been treated at St Andrew’s Community Hospital.

“Fractured hand after Rory McIlroy’s drive landed on my knuckle,” he wrote. “He shouted fore. I did not heed the warning. #TheOpen.” The post attracted plenty of attention, with over 150 people commenting on it and over 7,500 people liking it. 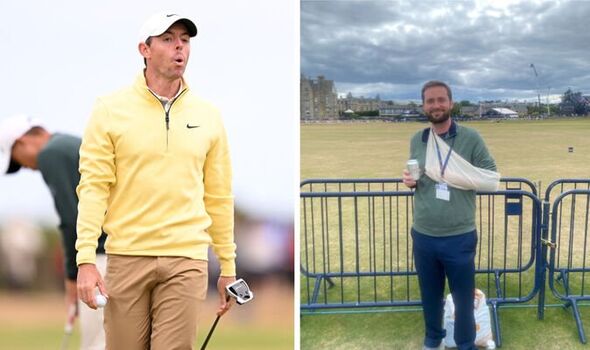 McIlroy’s first round score left him two shots behind leader Cameron Young as the first day came to an end. And following his impressive round, the Northern Irishman said: “It was the round you hope will happen starting out in the Open and everything that you are supposed to do at the Old Course. I took advantage of the easier holes and made my pars on more difficult ones.”

McIlroy now looks certain to make the cut at the end of the second day of play. And ahead of the tournament he had admitted he was confident of success. 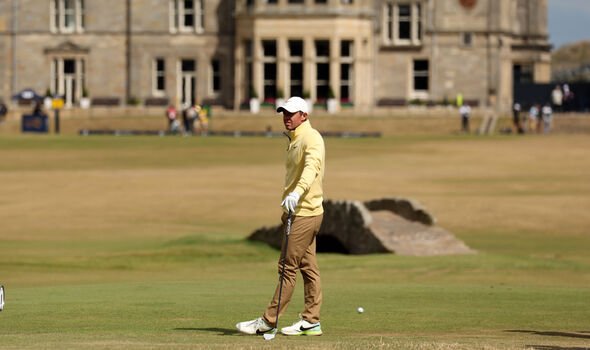 “I’m playing well, my form is good and my confidence is as high as it has been for a while,” revealed the 33-year-old at his pre-tournament press conference. “I can’t come here thinking it might be my turn (to win another major) but I’m happy with where everything is at.

“I can’t get ahead of myself – I just have to get in the right frame of mind. I can see it (the winning total) being low, but I can’t see something in the 20 under range. Everyone has seen how firm and fast the fairways are and it’s going to get pretty tricky at the end of the week.”