Sandwich: When Louis Oosthuizen sat around at his base and watched Collin Morikawa and Emiliano Grillo go close to equalling the course record under sun-kissed morning skies he would have been in no doubt what was required when he got his chance to play in mid-afternoon. The fact that he did just that, broke the halfway scoring record for the Open and moved two shots clear of the field spoke only of a man at ease with his game and the challenges of winning a second Open title.

The overnight leader, who won his only other major at St Andrews in 2010 and by seven shots, will be out in the last pairing on Saturday with Morikawa. Jordan Spieth is another shot adrift at eight under and Dylan Frittelli of South Africa, Dustin Johnson and Scottie Scheffler are a shot further back on seven under. 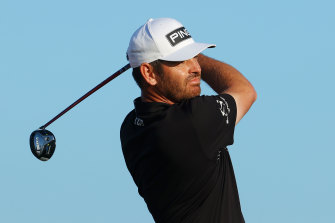 Louis Oosthuizen of South Africa on the 18th tee on the second day of the British Open.Credit:Getty Images

Most players would stick to what they are comfortable with when facing a challenge such as contesting a first Open, but Morikawa decided to swap three of his clubs and change his putting grip before stepping out at Royal St George’s this week, and the upshot was he found himself sitting on top of the leaderboard until Oosthuizen knocked him off it late in the afternoon.

The young American had contested last week’s Scottish Open at the Renaissance Club, where he finished tied 71st – his worst finish as a professional – and decided to make the changes, swapping three of his irons and switching to a conventional grip for his longer putts. It worked like a charm, and he even had a putt lip out at the last to equal Greg Norman’s long-standing course record of 63.

“I wouldn’t be here through these two rounds if I hadn’t played last week at (the) Scottish,” he said. “Having fescue fairways and the ball sitting a little different was huge to see last week. I changed my irons, my nine-iron through seven-iron that I normally have blades in. Last week I wanted to win, but I came out of it learning a lot more, and thankfully it helped for this week. Putting had to take some getting used to, but the saw grip was not working from outside 30 feet. I would have left everything 10 feet short. I had to change.”

Cameron Davies is at four under after a 67 that could have been better, but for a bogey at the last. The Australian is planning on having as late a night as he can courtesy of Netflix and will try to sleep in as he will tee off in one of the later pairings. He is intent on getting to double-digits under par as soon as possible.

Adam Scott is in the red numbers too, one under, and needs to get off to an even faster start, though he offered backing to his countryman. “Cam’s personality really suits tough events, not just on tough courses but on the big stage,” he said. “He’s got a lot of heart and a lot of fight in him. He could be easily overlooked until he wins one, which could be soon.”

Brooks Koepka, the four-time major winner but never an Open champion, came up with a late run of three birdies on the last three holes and will start his round at five under, the same score as England’s Paul Casey among others. “I’ve got to try to be within two or three of the lead going into Sunday, so I need to make a move, and I’ve got to do it tomorrow,” Koepka said.

His rival Bryson DeChambeau got around in par thanks to a two-under back nine and at one over just made the cut. Rory McIlroy is level par after another 70.

England’s Jon Thomson, who came through final qualifying and is the tallest man to ever contest the Open, had the first hole in one of the week when he got to the 16th battling the cut line at one over. He followed it with another birdie and after signing for a two-under total, was rewarded with weekend golf and a lifetime of memories.