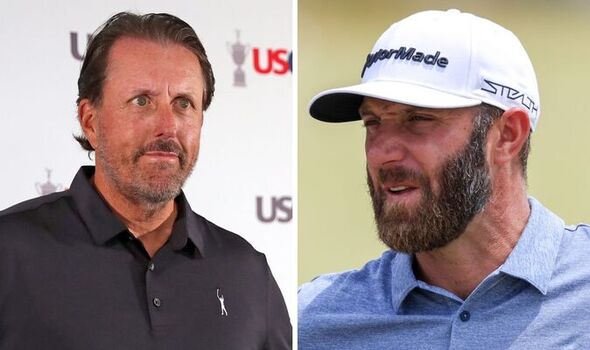 Phil Mickelson may well be playing in his last US Open with USGA officials warning that bans may well be brought in for those competing in the LIV Golf Series. Mickelson is playing in his first major of 2022 having skipped both The Masters and PGA Championship after his controversial comments about the Saudi-backed golf league.

The PGA Tour has since suspended all 17 members who competed in the inaugural LIV Golf Series last week at Hemel Hempstead. And more look set to follow with Bryson DeChambeau confirming his participation while Patrick Reed and Rickie Fowler are also being tipped to join.

But those looking to take part in the event and breakaway from the PGA Tour have been warned they could face bans from future US Opens. When the USGA chief executive, Mike Whan, was asked whether he could see a time where LIV golfers are banned from the US Open in the future, he said: “Yes.”

JUST IN: DeChambeau net worth and career earnings after joining LIV Golf

“We’ve been doing this for 127 years, so I think the three of us and everybody else that we work with need to take a long-term view of this and see where these things go so we’re not going to be a kneejerk reaction to what we do.

“But the question was: ‘Could you envision a day where it would be harder for some folks doing different things to get into a US Open?’ I could. Will that be true? I don’t know but I can definitely foresee that day.”

Given the attention the Saudi-backed LIV Golf Series has had over the past six months, there were some questions on whether that would even disqualify the PGA Tour rebels from majors this year. Whan admits discussions were had about the possibility of a ban being in place for 2022, but they ultimately decided against it.

“We [the USGA] definitely feel responsibility to this game, and we feel a responsibility to the competitors that play it. We did sit down and have a long conversation about a week before the US Open,” he added. “Did where somebody else played and what promoter they played it with disqualify them for this event? We decided no on that, with all the awareness that not everyone would agree with that decision.

“Whether we all like it or not, in February 30 guys played for the same promoter in Saudi Arabia with an acceptable release from the PGA Tour, and for years the DP World Tour has had an event there, same promoter. I’m sure there are players that both came through our qualifying and maybe teeing it up that are sponsored by those different – so we asked ourselves the question: one week before, if you play somewhere where you’re not approved to play, would you be disqualified for the 2022 US Open?

“We said no. And we also had to ask the question, if you’re going to put that kind of clause in, who gets in? It becomes a pretty slippery slope to try to apply that across 9,300 people.”