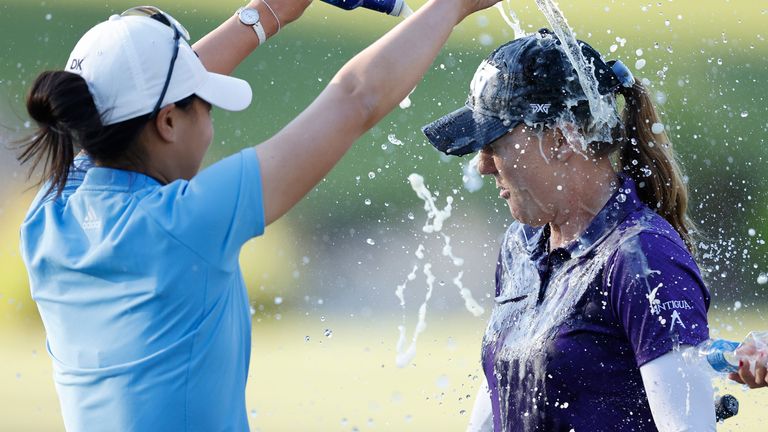 Austin Ernst secured a third LPGA Tour title and second in as many years with a wire-to-wire victory at the LPGA Drive On Championship in Florida.

Ernst took a one-shot lead over Jennifer Kupcho into the final day at Golden Ocala Golf Club and quickly pulled clear of her playing partner, with a two-under 70 enough to cruise to a five-shot win.

The American finished on 15 under and five shots clear of Kupcho, who could only return a 74, with compatriot Jenny Coleman a further two strokes back in third ahead of Korea’s In Chee Gun. After the leading duo opened with three straight pars, a two-shot swing saw Kupcho bogey the fourth and Ernst roll in an eight-foot birdie to open up a three-shot advantage.

Ernst lagged a putt from off the green to six feet and posted another birdie, before firing her tee shot at the sixth to close range and taking advantage of the par-five seventh to reach the turn six ahead.

Kupcho birdied the 10th and 12th, where Ernst posted the first of back-to-back bogeys, to briefly reduce the advantage to three, only for Kupcho to also drop a shot at the 13th and then make a double-bogey at the 15th.

Ernst then parred the last three holes to complete her convincing victory, which is her first since the 2020 NW Arkansas Championship.

Ireland’s Leona Maguire birdied the last two holes to end the week tied-sixth alongside Danielle Kang, while a final-round 70 from Charley Hull was enough to claim a share of eighth place.