Home » Golf » ‘It was his life and his love’: Bob Shearer, who fleeced Jack Nicklaus on his own course, dies

There was a time in golf when Jack Nicklaus had been the world’s best for 20 years, and under the shadows of a clubhouse burnt to the ground a few weeks beforehand, headlined the Australian Open in 1982. The Golden Bear was in his early 40s, age advancing, yet not wearying. The Australian Open was still a lure.

Organisers, as they tend to do, wanted a marquee pairing for Nicklaus, so crowds would envelop the group around The Australian Golf Club. Greg Norman didn’t know if he was going to play in the tournament on the day it started. He had a kidney stone removed 24 hours beforehand, so he was a risk. Norman eventually decided to play an hour before his first-round tee time, but he was in so much pain, withdrew at the end of the opening round.

So they turned to a rugged Australian named Bob Shearer, a man of his time with a moustache to match. Shearer was at the height of his powers and a winner of umpteen Australasian tournaments, but never one of the magnitude of the Australian Open, which was still big enough in those days to be a lure for the likes of Nicklaus.

“When you play with Jack Nicklaus, it makes you concentrate better,” Shearer quipped.

At one stage in the first round, Shearer became so incensed with a greenside bunker shot which barely scraped out of the sand, he flailed his club in frustration, taking a puff of sand with it. Unbeknownst to him, his ball had already funnelled back into the trap. It was an infraction of golf’s strict rules. He was penalised two shots.

How can you beat Nicklaus on a level playing field, let alone with a handicap like that? 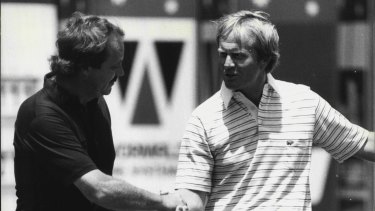 Three days later, penalty shots and all, Shearer was paired with Nicklaus again in the last group. He chipped in for birdie with a miraculous shot during his back nine. Moments earlier he had been distracted by a photographer stepping on a tree branch during a back swing. It didn’t matter.

Less than an hour later, he rolled in his final putt on the 18th hole to beat Nicklaus, who was in a tie for second with Payne Stewart, by four shots, the crowning moment of a career which included tour wins in the United States and Europe, as well as life membership of the PGA of Australia.

Tributes were pouring in for Shearer after the colossal figure in Australian golf died of a heart attack on Sunday morning. He was 73.

“Bob was a giant of the game here in Australia in the ’70s and ’80s and I am just absolutely devastated that I have lost another of my great mates,” said PGA chair Rodger Davis.

“Bob and I travelled a lot together playing in Europe and as tough as he was to beat on the golf course you couldn’t find a better bloke to have a beer with after the round. 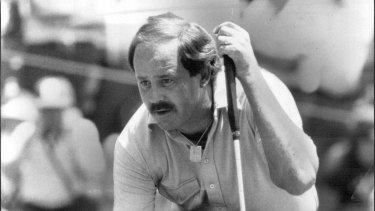 Bob Shearer won in both Europe and the United States.Credit:Fairfax Media

“On behalf of the PGA of Australia I would like to extend my heartfelt condolences to his wife Kathie and all of Bob’s family and friends at this incredibly sad time.”

Until his death, Shearer would still play golf three or four times a week. His home club was Southern in Melbourne. He had planned to play on Monday.

The magnitude of his win over Nicklaus was enhanced by the fact it was on a course designed by the American legend. It was a path Shearer followed in later life, an ambition to create layouts which “challenge the eye, the mind and the body”.

In latter years, his friends would rib him about wife Kathie’s popularity exceeding anything he achieved throughout his career.

Kathie has run the media centres at most major Australian golf tournaments for decades, welcoming players, as well as local and international media. There’s no more endearing figure at any event. Bob would simply be told: “She’s not Bob’s wife, you’re Kathie’s husband”.

“I’d like to say he was what he needed to be,” Kathie said. “He was golf. It was his life and his love. He played three or four times a week and it was everything to him.”

Shearer is survived by his wife Kathie and their two sons, Brett and Bobby.